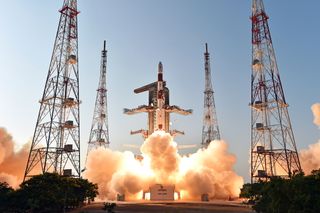 The Indian Space Research Organization (ISRO) is India's national space agency. India has been steadily building its launching and exploration capabilities for decades. ISRO's roots stretch back to 1962, when India's first prime minister, Jawaharlal Nehru, enlisted physicist Vikram Sarabhai to set up the Indian National Committee for Space Research (INCOSPAR). Sarabhai is known as the founding father of India's space program because of this effort.

India's first rocket launch flew from Saint Mary Magdalene Church in the fishing village of Thumba in Thiruvananthapuram, Kerala, on Nov. 21, 1963. The sounding rocket, which only reached sub-orbital space, was called Nike-Apache and its components were built by NASA. The payload was famously transported to the launch site by bicycle, according to an article in India Today. ISRO now refers to the church as the Mecca of Indian rocket science.

INCOSPAR was superseded by ISRO in 1969. Six years later, the country launched its first satellite, called Aryabhata, into orbit aboard a Soviet rocket. Named for an ancient Indian astronomer, Aryabhata conducted experiments in X-ray astronomy and solar physics, though it ceased to function after only a few days in space.

In 1979, ISRO conducted the first tests of its own homegrown orbital rocket, the Satellite Launch Vehicle-3 (SLV-3). The four-stage vehicle was capable of placing payloads up to 88 lbs. (40 kilograms) into orbit. SLV-3 successfully launched for the first time on July 18, 1980, making India the sixth nation to achieve spaceflight. It carried the Rohini-1 satellite, an experimental satellite developed to test components that could be used in space.

The first and so far only Indian astronaut is Rakesh Sharma, an Indian Air Force pilot who flew with two Russian cosmonauts to the Soviet space station Salyut 7 in 1984. Sharma prepared for his time in microgravity with specialized yoga exercises, according to the Indian history section of Space Today. He also conducted multispectral photography of the northern region of India in preparation for construction of hydroelectric power stations in the Himalayas during his time in orbit.

ISRO has conducted robotic missions to other worlds in our solar system. In 2008, the agency sent the Chandrayaan-1 orbiter to the moon. The probe, whose name means "moon craft" in ancient Sanskrit, was about the size of a refrigerator and helped discover evidence of water molecules on the moon. Five years later, ISRO flew the Mars Orbiter Mission, nicknamed Mangalyaan or "Mars craft," to the Red Planet. The vehicle successfully reached Mars in 2014, making India's space agency just the fourth entity to place a spacecraft in Martian orbit. The mission was completed at a record-low cost of $74 million.

The agency is gearing up for its next lunar mission, Chandrayaan-2, expected to launch later this year. Chandrayaan-2 will consist of a lunar orbiter, which will map the moon from an altitude of 62 miles (100 kilometers), and a lander, which is expected to touch down near the lunar south pole and deploy a small rover. If the mission succeeds, India will become either the fourth or fifth country to achieve a soft landing on the moon, following the U.S., Soviet Union, China, and, perhaps, Israel. (The Israeli lunar lander, Beresheet, is on its way to the moon now, and is expected to touch down on April 11.)

India is aiming to become one of the few nations to send humans into space using their own rockets. On Aug. 15, 2018, Indian prime minister Narendra Modi announced that the country expects its first crewed flight in 2022. ISRO's human spaceflight program has been allocated the equivalent of $1.3 billion to achieve this task under a scheduled series of missions called Gaganyaan.

"Our country has made great progress in space," Modi said during a speech on Aug. 15, 2018, to mark the country's independence day, according to a translation by the Planetary Society, a nonprofit space science organization. "But our scientists have a dream. By 2022, when it would be 75 years of independence, an Indian — be it a man or a woman — will go to space with the tricolor flag in their hands."

U.S. spacefarers are known as astronauts, while Russian ones are referred to as cosmonauts. The Chinese equivalents have been dubbed taikonauts. So, what will Indian astronauts be known as? According to an article in Scientific American, they will be called vyomanauts, from the Sanskrit word "vyoma," meaning "sky."