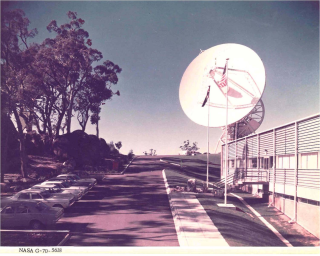 The 26-meter (85 feet) antenna in Honeysuckle Creek, Australia, was built in 1967 as part of the Manned Space Flight Network (MSFN) to support the lunar phase of the Apollo mission to the Moon.
(Image: © NASA)

NASA relied on the U.S. State Department to implement an extensive global network of antennas to collect radio signals from the Apollo missions, including the first moon landing, which occurred 50 years ago.

The monitoring system, collectively referred to as the Spaceflight Tracking and Data Network, has gone through various incarnations: It cut its teeth tracking the first artificial satellites around Earth.

By the time the first American flew in space, NASA had already established at least 30 ground stations on five continents; several islands; and aboard ships sailing the Atlantic, Indian and Pacific oceans, according to author Sunny Tsiao in the NASA History Series digital book "Read You Loud and Clear!" (2008).

This electronic link to spacecraft and astronauts involved "two million circuit miles of land and ocean floor cables," reaching from remote volcanic atolls to cities like Madrid and Canberra, Australia, Tsiao wrote. When antennas collected data, computers and electronics on the ground converted all of it into information that users on Earth could analyze for checks on the health and status of the spacecraft.

Once crewed spaceflight became a reality, engineers at the Goddard Space Flight Center in Maryland and the Manned Spacecraft (now the Johnson Space) Center in Houston created the network that tracked the Apollo astronauts to the moon and back, abbreviated as MSFN (initially known as the Mercury Space Flight Network, the "M" changed to "'Manned" later on.) Goddard ran the entire network.

"And all that data — voice data, telemetry data — all came down and eventually went through Goddard before going to Houston," NASA lunar scientist Noah Petro told Space.com. "Goddard was and still is basically NASA's hub for communications."

The State Department played a crucial role in helping NASA work with foreign governments to place antennas for the network, particularly where the U.S. was less popular and tensions ran high, Tsiao wrote.

In other cases, like Australia, countries were eager to take part and the U.S. encouraged them to take the helm of the communications stations. NASA selected the Parkes Observatory in New South Wales, Australia, to receive the remote Apollo 11 moonwalk readings, or telemetry. The 85-foot antenna at Honeysuckle Creek to the south, near the city of Canberra, received video of Neil Armstrong and Buzz Aldrin as they took the first steps on the moon. The latter instrument is still in use, but has since moved to nearby Tidbinbilla.

Officials at NASA wanted to maintain contact with Apollo's Eagle lunar module as it descended to the moon's surface after emerging from behind the moon. If the Apollo 11 crew needed to abort the landing, there was a very short period of time in which they could make the decision. And the moon would be visible in Australia when this crucial moment was scheduled to occur.

Honeysuckle Creek carried most of NASA's communications with Armstrong and Aldrin during their extravehicular activity. The most crucial of those communications were biomedical data from the astronauts' Portable Life Support System backpacks. Most of the data from the Columbia command module, which carried astronaut Michael Collins, traveled to the 26-meter antenna at Tidbinbilla.

These telescopes are now part of the Canberra Deep Space Communication Complex. The CDSCC supports NASA's Deep Space Network, which now receives information from spacecraft much farther away in the solar system, including the Voyager probes that have crossed into interstellar space.