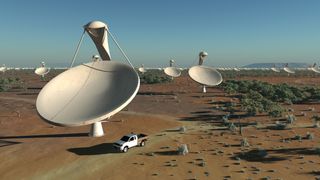 The world's largest and most sensitive radio telescope will be shared by South Africa and Australia, project organizers announced today (May 25).

Both nations had been vying to host the Square Kilometer Array (SKA), a future mega-scope that will connect 3,000 separate radio dishes, each about 50 feet (15 meters) wide. (The array's name refers the dishes' total collecting area, not how much ground they cover.)

But SKA officials have now decided to spread the project over both sites, rather than pick one over the other.

"This hugely important step for the project allows us to progress the design and prepare for the construction phase of the telescope," said Michiel van Haarlem, interim director general of the SKA Organization.

The SKA's many receptors will be arrayed in spiral arms extending out at least 1,864 miles (3,000 kilometers) from a central core, officials have said. The 1.5-billion-euro (roughly $2 billion) construction project is slated to begin in 2016, with the SKA's first science operations starting three years later. The array is expected to be fully operational by 2024.

The enormous array will have 50 times the sensitivity and 10,000 times the survey speed of the best current-day telescopes, SKA officials said. The instrument will allow scientists to investigate a variety of questions, including how the first stars and galaxies formed, how dark energy is accelerating the expansion of the universe and the nature of gravity.

"The SKA will transform our view of the universe; with it we will see back to the moments after the Big Bang and discover previously unexplored parts of the cosmos," van Haarlem said.

Both Australia and South Africa have begun building large radio telescope arrays designed to serve as precursors to the SKA — the Australian Square Kilometre Array Pathfinder (ASKAP) and the Karoo Array Telescope (known as MeerKAT), respectively.

The ASKAP and MeerKAT dishes will be incorporated into the SKA, to maximize on investments already made by both Australia and South Africa, officials said.

The site selection team took many factors into account while making their decision, including levels of radio frequency interference, long-distance data network connectivity, operating and infrastructure costs and the political and working environment, officials said.