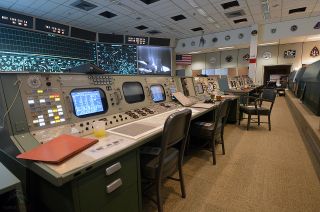 NASA's Apollo-era Mission Operations Control Room at Johnson Space Center in Houston has been restored to how it looked when the first astronauts landed on the moon.
(Image: © collectSPACE.com)

NASA's Mission Control is ready to land humans on the moon again, multiple times a day.

The Apollo-era Mission Operations Control Room (MOCR, pronounced "moh-ker"), a National Historic Landmark since 1985, has been restored to appear as it did when astronauts first walked on the moon 50 years ago. A ribbon-cutting ceremony on Friday morning (June 28) marked the completion of the restoration and the restart of the room's use, now to re-stage the Apollo 11 first moon landing during daily public tours at NASA's Johnson Space Center in Houston.

"I'm thrilled this facility will be open for the public to view. It is my hope that it will serve as inspiration for generations to come," Mark Geyer, director of Johnson Space Center, said in a statement. "Apollo captured the world's attention and demonstrated the power of America's vision and technology."

Space Center Houston, the official visitor center for Johnson Space Center, runs the tours that will bring visitors to the historic Mission Control. The center's NASA tram tour will begin taking the public to the restored MOCR on Monday (July 1).

"[Visitors] used to experience, when they came in, we would tell them about Mission Control, but none of the screens were lit up, none of the consoles were lit up. There was no audio, there was no video really at all," Tracy Lamm, Space Center Houston's chief operating officer, told collectSPACE.com. "The new experience, as you come in, you'll get to learn a bit more about Mission Control in the lobby, and, as you're walking up the stairs, you'll get to hear some of the [audio] loops that are going on."

Visitors will hear the real voices of the flight controllers from 50 years ago just as Apollo 11 astronauts Neil Armstrong and Buzz Aldrin were preparing to begin their descent to the lunar surface. Taking a seat in the same glassed-in viewing gallery where the astronauts' families and other guests witnessed the mission unfold live in 1969, the public will watch as the consoles and screens play back the first moon landing, moonwalk and the astronauts' return to Earth.

"For people who are interested in the history, I think this will be one of the touchstone places they [will] want to come. And a lot of people will just come here just to experience this," said Lamm.

Located on the third floor of the Christopher C. Kraft, Jr. Mission Control Center at Johnson Space Center, the Historic Mission Control (MOCR-2, later known as Flight Control Room-2, or FCR-2) had remained in the condition it was left when it was last used for for space shuttle Discovery's STS-53 mission in 1992. The flight controllers' consoles — the iconic, two-tone green metal cabinets — were original to the Apollo-era, but most everything else dated to later programs.

In 2017, NASA, together with the Texas Historical Commission and National Park Service, agreed to a comprehensive plan for returning the room to its Apollo glory in time for the 50th anniversary of the first moon landing. Space Center Houston, as a separate not-for-profit organization, spearheaded a campaign to raise the $5 million needed for the restoration, including $3.5 million donated by the nearby city of Webster, Texas.

The Cosmosphere in Hutchison, Kansas, was selected to work on the consoles. The space museum's SpaceWorks fabrication and restoration facility returned the cabinets to their configuration for the 1971 Apollo 15 mission — the pinnacle of the era's technology and the mission for which the most complete records still exist.

Conservators removed the original cathode-ray tube displays and button backlight assemblies and replaced them with modern electronics and screens, enabling the consoles to glow again as they did half a century ago. Each of the control stations now shines with data and indicators as it did when it was in active use.

"They're artifacts and so you don't destroy artifacts," said Sandra Tetley, NASA's historic preservation officer at Johnson Space Center. "We took the CRTs out and they've been saved. We put flat screens [in their place] and then they recreated the fronts. Behind the buttons are LED lights. So everything is placed in there non-destructively."

The restoration did not end with the consoles. The work extended from the floor to the ceiling.

A sample of the room's original carpet was found underneath a pneumatic-, or p-tube station, the MOCR's way of conveying memos (and other items) by vacuum tubes running between consoles and their support back rooms. NASA brought the carpet fragment to its manufacturer.

"The original carpet was created using a woven method, which they don't do any more. They do a tufted method," Tetley told collectSPACE. "So, we took it to Shaw Floors and they analyzed how to do it and, using the tufted method, they added an additional yarn, so they were able to recreate the carpet."

The same approach was taken with the ceiling tiles and the wallpaper.

"We found a piece of the wallpaper behind a fire extinguisher," said Tetley, adding that NASA had the paper's manufacturer on record as part of the plans for the room. "We went to the company that made it and they found the original roller in their warehouse. It had been retooled, but we were able to create an exact copy of the wallpaper."

Sometimes the restoration work was less about recreation as it was exposing the original.

Tetley and her restoration team used archival photos, film footage and records to dress the MOCR, sourcing everything from the brand of pen that the Apollo flight controllers used to commissioning new upholstery to match the chairs on which they sat.

"We actually found the rocket coffee pot that was back there," said Tetley, pointing to the corner of the room. "We found that new-in-box on Etsy, so that has been recreated. Even the type of creamer in the coffee they made, or that they drank."

Another detail they found were the ash trays that became part of the iconography of the room.

The surviving members of the Apollo 11 flight control team were also consulted and many provided their original mission documents to be copied for placement at their consoles.

"It's a great honor to leave [this as] a legacy for the Apollo controllers," she said. "There's so much focus on the astronauts and all that, it's neat to be here making this come back to life."