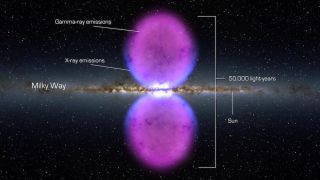 The Fermi Bubbles are two enormous orbs of gas and cosmic rays that tower over the Milky Way, covering a region roughly as large as the galaxy itself. These giant space bubbles may be fueled by a strong outflow of matter from the center of the Milky Way.
(Image: © NASA Goddard)

In 2010, astronomers working with the Fermi Gamma-ray Space Telescope announced the discovery of two giant blobs. These blobs were centered on the core of the Milky Way galaxy, but they extended above and below the plane of our galactic home for over 25,000 light-years. Their origins are still a mystery, but however they got there, they are emitting copious amounts of high-energy radiation.

More recently, the IceCube array in Antarctica has reported 10 super-duper-high-energy neutrinos sourced from the bubbles, leading some astrophysicists to speculate that some crazy subatomic interactions are afoot. The end result: the Fermi Bubbles are even more mysterious than we thought.

It's not easy to make big balls of hot gas. For starters, you need energy, and a lot of it. The kind of energy that can spread hot gas to a distance of over 25,000 light-years doesn't come easily to a typical galaxy. However, the peculiar orientation of the Fermi Bubbles — extending evenly above and below our galactic center — is a strong clue that they might be tied our central supermassive black hole, known as Sagittarius A*.

Perhaps millions of years ago, Sag A* (the more common name for our giant black hole, because who wants to keep typing or saying "Sagittarius" all the time?) ate a giant meal and got a bad case of indigestion, with the infalling material heating up, twisting around in a complicated dance of electric and magnetic forces, and managing to escape the clutches of the event horizon before falling in. That material, energized beyond belief, raced away from the center of the galaxy, riding on jets of particles accelerated to nearly the speed of light. As they fled to safety, these particles spread and thinned out, but maintained their energetic state to the present day.

Or perhaps a star wandered too close to Sag A* and was ripped to shreds, releasing all that potent gravitational energy in a single violent episode, leading to the formation of the bubbles. Or maybe it had nothing to do with Sag A* itself, but the multitude of stars in the core — perhaps dozens or hundreds of those densely packed stars went supernova at around the same time, ejecting these plumes of gas beyond the confines of the galactic more.

Or maybe none of the above.

No matter what, the bubbles are here, they're big, and we don't understand them.

Gamma and the neutrino

You can't see the Fermi Bubbles with your naked eye. Despite their high temperatures, the gas inside them is incredibly thin, rendering them all but invisible. But something within them is capable of making the highest-energy kind of light there is: gamma rays, which is how the Fermi team spotted them.

We think that the gamma rays are produced within the bubbles by cosmic rays, which themselves are high-energy particles (do you get the overall "high energy" theme here?). Those particles, mostly electrons but probably some heavier fellas too, knock about, emitting the distinctive gamma rays.

But gamma rays aren't the only things that high-energy particles can produce. Sometimes the cosmic rays interact with each other, perform some complicated subatomic dance of matter and energy, and release a neutrino, an almost-massless particle that only interacts with other particles via the weak nuclear force (which means it hardly ever interacts with normal matter at all).

The IceCube Observatory, situated at the geographic south pole, uses a cubic kilometer of pure Antarctic water ice as a neutrino detector: every once in a rare while, a high-energy neutrino passing through the ice interacts with a water molecule, setting up a domino-like chain reaction that leads to a shower of more familiar particles and a telltale flash of light.

Due to the nature of its detectors, IceCube isn't the greatest when it comes to pinpointing the exact origin location for a neutrino. But to date, it has found 10 of these little ghosts coming from roughly the direction of the two Fermi Bubbles.

Is this coincidence, or conspiracy?

So something could be producing these extremely exotic neutrinos inside the Fermi Bubbles. Or not — it could just be a coincidence, and the neutrinos are really coming from some distant part of the universe behind the Bubbles.

What's more, somehow the cosmic rays are producing all the gamma rays, though we're not exactly sure how. Perhaps we might get lucky: maybe there's a single set of interactions inside the Bubbles that produces both gamma rays and the right kind of neutrinos that can be detected by IceCube. That would be a big step up in explaining the physics of the Bubbles themselves, and give us a huge clue as to their origins.

Recently, a team of researchers pored through the available data, even adding results from the newly operational High Altitude Water Cherenkov detector (a super-awesome ground-based gamma ray telescope), and combined that information with various theoretical models for the Bubbles, searching for just the right combo.

In one possible scenario, protons inside the Bubbles occasionally slam into each other and produce pions, which are exotic particles that quickly decay into gamma rays. In another one, the flood of high-energy electrons in the Bubbles interacts with the ever-present radiation of the cosmic microwave background, boosting some lucky photons into the gamma regime. In a third, shock waves at the outer edges of the Bubbles use magnetic fields to drive local but lethargic particles to high velocities, which then begin emitting cosmic rays.

But try as they might, the authors of this study couldn't find any of the scenarios (or any combination of these scenarios) to fit all the data. In short, we still don't know what drives the gamma ray emission from the Bubbles, whether the Bubbles also produce neutrinos, or what made the Bubbles in the first place. But this is exactly how science is done: collecting data, ruling out hypotheses, and forging onward.

Read more: "Correlation of high energy neutrinos and gamma rays on the direction of Fermi Bubbles"