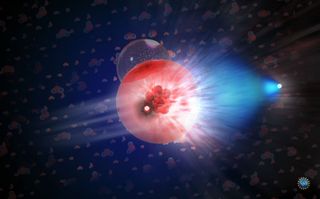 The masses of "true neutrinos" have long evaded physicists, but the IceCube Neutrino Observatory in Antarctica may help physicists find them. In this illustration, a neutrino interacts with Antarctic ice, shedding a muon in the process. As that muon moves at ultrafast speed, it leaves a telltale trail of blue light, known as Cherenkov radiation.
(Image: © Nicolle R. Fuller/NSF/IceCube)

Neutrinos are perhaps the most puzzling of the known particles. They simply flout all the known rules of how particles ought to behave. They scoff at our fancy detectors. Like cosmic cats, they traipse throughout the universe without worry or care, occasionally interacting with the rest of us, but really only when they feel like it, which honestly isn't all that often.

Most frustrating of all, they wear masks and never look the same way twice.

But a new experiment may have taken us just a step closer to ripping off those masks. Revealing the true neutrino identity could help answer long-standing questions, like whether neutrinos are their own antimatter partners, and it could even help unify the forces of nature into one cohesive theory. [The 18 Biggest Unsolved Mysteries in Physics]

Neutrinos are weird. There are three kinds: the electron neutrino, the muon neutrino and the tau neutrino. (There are also the antiparticle versions of those three, but that's not a big part of this story.) They are so named because these three kinds get to party with three different kinds of particles. Electron neutrinos join interactions involving electrons. Muon neutrinos get paired up with muons. No points will be awarded for guessing what the tau neutrino interacts with.

So far, that's not weird at all. Here comes the strange part.

But the same does not go for their cousins, the electron, muon and tau neutrinos.

What we call, say, the "tau neutrino" isn't always the tau neutrino. It can change its identity. It can become, midflight, an electron or muon neutrino.

This weird phenomenon that basically nobody was expecting is called neutrino oscillation. It means, among other things, that you may create an electron neutrino and send it over to your best friend as a present. But by the time they get it, they may be disappointed to find a tau neutrino instead.

For technical reasons, the neutrino oscillation works only if there are three neutrinos with three different masses. But the neutrinos that oscillate are not the electron-, muon- and tau-flavored neutrinos.

Instead, there are three "true" neutrinos, each with different, but unknown masses. A distinct mix of these true, fundamental neutrinos creates each of the neutrino flavors we detect in our laboratories (electron, muon, tau). So, the lab-measured mass is some mixture of those true neutrino masses. Meanwhile, the mass of each true neutrino in the mix governs how often it morphs into each of the different flavors. [Images: Inside the World's Top Physics Labs]

The job for physicists now is to disentangle all the relationships: What are the masses of those true neutrinos, and how do they mix together to make the three flavors?

So, physicists are on a hunt to uncover the masses of the "true" neutrinos by looking at when and how often they switch flavors. Again, the physics jargon is very unhelpful when explaining this, as the names of these three neutrinos are simply m1, m2 and m3.

It could be that m3 is the heaviest, far outweighing m2 and m1. This is called "normal ordering" because it seems pretty normal — and it's the ordering physicists essentially guessed decades ago. But based on our current state of knowledge, it could also be that m2 is the heaviest neutrino, with m1 not far behind and m3 puny in comparison. This scenario is called "inverted ordering," because it means we guessed the wrong order initially.

Of course, there are camps of theorists pining for each of these scenarios to be true. Theories that attempt to unify all (or at least most) of the forces of nature under a single roof typically call for normal neutrino-mass ordering. On the other hand, inverted-mass ordering is necessary for the neutrino to be its own antiparticle twin. And if that was true, it could help explain why there is more matter than antimatter in the universe.

Which is it: normal or inverted? That's one of the biggest questions to spring up from the past couple decades of neutrino research, and it's exactly the kind of question that the massive IceCube Neutrino Observatory was designed to answer. Located at the South Pole, the observatory consists of dozens of strings of detectors sunk into the Antarctic Ice Sheet, with a central "DeepCore" of eight strings of more-efficient detectors capable of seeing lower-energy interactions.

Neutrinos barely talk to normal matter, so they're perfectly capable of jetting straight through the body of Earth itself. And as they do so, they will morph into the various flavors. Every once in a rare while, they will strike a molecule in the Antarctic Ice Sheet near the IceCube detector, triggering a cascading shower of particles that emit a surprisingly blue light called Cherenkov radiation. It's this light that the IceCube strings detect.

In a recent paper published on the pre-print journal arXiv, IceCube scientists used three years of DeepCore data to measure how many of each kind of neutrino passed through Earth. Progress is slow, of course, because neutrinos are so hard to catch. But in this work. the scientists report a slight preference in the data for normal ordering (which would mean we guessed right decades ago). However, they've found nothing too conclusive yet.

Is this all we'll get? Certainly not. IceCube is preparing for a major upgrade soon, and new experiments like the Precision IceCube Next Generation Upgrade (PINGU) and Deep Underground Neutrino Experiment (DUNE) are gearing up to tackle this central question too. Who knew that such a simple question about the ordering of neutrino masses would reveal so much of the way the universe works? It's too bad it's also not an easy question.

Paul M. Sutter is an astrophysicist at The Ohio State University, host of "Ask a Spaceman" and "Space Radio," and author of "Your Place in the Universe."