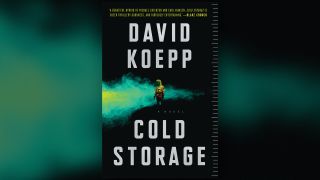 Many fans of the original "Jurassic Park" (1993) movie probably remember a chaos theoretician's musings on the resilience of life, a theme the film's screenwriter explores again in the new novel "Cold Storage" about NASA's Skylab space station.

In the dinosaur vs. human tale of the 1990s, Ian Malcolm (played by Jeff Goldblum) famously remarks of so-called controlled experiments in genetics: "Life breaks free. It expands to new territories, crashes through barriers, painfully, maybe even dangerously."

That idea still entrances "Jurassic Park" screenwriter David Koepp, even in his own backyard. In an interview, he told Space.com about wrestling with an Asiatic vine that blew into the New York City region on the back of Superstorm Sandy in 2012. The vine can grow 6 inches (15 centimeters) in a day, he said with wonder, adding that he's been pulling it up repeatedly by the roots only to watch it revive again and again.

This fascination led him to wonder whether life could have survived on the Skylab space station, a question he pursues in his new novel, "Cold Storage" (HarperCollins, 2019).

"I didn't want [the novel to have] a meteor to hit the Earth and contain an organism, because it's something we already see a lot [in science fiction]," Koepp said. But he did like the idea of launching something to space that returns, which naturally led to the riveting story of NASA's Skylab space station.

There and back again

Skylab was a productive U.S. space station with a troubled beginning and end. Part of the station inadvertently ripped off during launch on May 14, 1973, forcing the lab's first crew to stage a rescue mission. Skylab, nonetheless, was saved and successfully hosted three crews. Then, on July 11, 1979, it deorbited and pieces accidentally rained down on rural Australia. Nobody was hurt, and some of the space station chunks ended up in local museums.

That's where Koepp's fictional story begins. In the novel, NASA's Space Biosciences Research Branch (which does exist in real life) receives a message about an oxygen tank that fell decades before, in a remote town called Kiwirrkurra. The caller is so desperate that he makes 17 phone calls to the United States, starting with the White House, every time driving 30 miles (nearly 50 kilometers) each way to reach a phone line. The reason this person is so determined? "People were dying," the book explains.

But of what? Evidence points to a "pernicious" real-life organism called Ophiocordyceps unilateralis, a sort of cousin to the tenacious and more infamous Clostridium difficile that haunts hospitals. The cordyceps fungus, we learn, can survive just about anywhere: volcanoes, the ocean bottom, even space. In Koepp's story, the fungus broke through the Skylab tank after people mistakenly tried to remove some rust, which seeped into microfissures and opened up a spot for the fungus to revisit Earth.

Scientists, naturally being a curious lot, head off to Australia to investigate — and that's when the horror-movie fun begins. We won't spoil the plot, but Koepp said he worked to enliven the science with interesting characters. He focused on humor, an approach that he said worked well for Andy Weir's 2011 book, "The Martian,"(Crown Publishing) a tale of an astronaut stranded on Mars that spawned a blockbuster Hollywood film in 2015. (Like "The Martian," Koepp's book focuses on themes that may be best suitable for an adult audience.)

"I haven't written a book before," Koepp said, "and I tried not to have ambitions to write the Great American Novel — but [instead] to tell a great story."

To him, the possibility of writing a novel made him "really drunk with the ability" to talk about people's thoughts or to go into long descriptions, something that is not possible in screenwriting (since that discusses only what the audience or the characters directly perceive). "I want people to come away from it feeling it was fun and exciting and [they] learned a couple of things," Koepp said of the book.

Related: What Does the End of the World Look Like? A Q&A with the Author of 'End Times'

While the Skylab scenario Koepp portrays is fanciful, he said he did try to stick to real science where possible. That included asking a scientist friend to review the final draft and talking with his science-crazy preteen son about plot ideas.

NASA also thinks a lot about space microbes; the agency is famous for battling to prevent the accidental export of Earth organisms to Mars on spacecraft. And one of the technical challenges holding up a Martian sample-return mission is figuring out how to protect Earth from Mars microbes. (Koepp himself tackled interplanetary biology in his 2005 screenplay adapting H.G. Wells' 1898 classic "The War of the Worlds," so the screenwriter is well versed in these issues.)

"I wonder if there is such a thing as a 'clean' room," Koepp mused when discussing NASA discoveries that there are even  microbes that are unique to carefully controlled spacecraft-preparation rooms. A 2013 study led by NASA's Jet Propulsion Laboratory discovered Tersicoccus phoenicis, which, incredibly, persisted in two unrelated spacecraft clean rooms located 2,500 miles (4,000 km) apart. The microbe was identified in a NASA facility at the Kennedy Space Center and a European Space Agency facility in Kourou, French Guiana.

Koepp may have plenty of time to pursue the topics of clean rooms and life's resilience in an adaptation of "Cold Storage," since movie rights for the book have already sold. With that opportunity comes the chance to actually visit the Australian Outback and see the areas that he imagined in his book but didn't have time to visit while writing.

You can buy "Cold Storage" on Amazon.com.