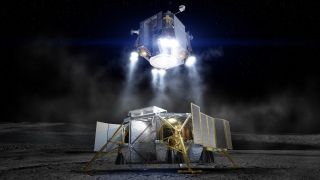 An artist's concept of a Boeing moon lander for astronauts for NASA's Artemis program to return humans to the moon by 2024.
(Image: © Boeing)

Boeing is already building a new spaceship and a giant rocket for NASA. Now, the aerospace company wants to go to the moon.

On Tuesday (Nov. 5), Boeing delivered a proposal to NASA for a crewed lunar lander to fly astronauts to the moon in 2024 as part of the agency's Artemis program. The moon lander will draw on Boeing's experience in working with NASA on the International Space Station (ISS), the Space Launch System megarocket and the company's own private Starliner crew capsule that aims to deliver astronauts to the moon as fast as possible, Boeing representatives said.

"Using the lift capability of NASA's Space Launch System (SLS) Block 1B, we have developed a 'Fewest Steps to the Moon' approach that minimizes mission complexity while offering the safest and most direct path to the lunar surface," Jim Chilton, senior vice president of the Space and Launch division of Boeing Defense, Space and Security, said in a statement.

A moon lander for Boeing

NASA launched a call for commercial moon lander ideas on Sept. 30, giving companies until this week to submit ideas. The space agency's Artemis program seeks to land at least two astronauts on the moon in 2024 using a stepping stone approach that includes building a Gateway station near lunar orbit and relying on its own Orion crew capsule, commercial cargo ships and lunar landers, and tug-like transfer vehicles to move those landers to and from low lunar orbit.

Boeing's moon lander won't need that space tug to move from the Gateway to the moon.

"Boeing's integrated lander also can carry itself from lunar orbit to the surface without an additional transfer stage or 'space tug,' further reducing launches and simplifying the steps to a successful landing," company representatives wrote in the statement. "It can dock with the Gateway lunar orbiter or directly with NASA's Orion to eliminate the need for an additional spacecraft, both on time to meet the 2024 mandate."

Boeing's moon lander concept does rely on NASA's SLS, the current megarocket of choice for the agency's Orion spacecraft. An initial version of the rocket, called Block 1, will be used to launch Orion spacecraft. But NASA will need a higher-powered variant, called Block 1B — which features a hefty Exploration Upper Stage — to fulfill its moon landing plans. That Block 1B rocket will be the main ride for Boeing's moon lander.

Currently, Boeing is building the first Block 1 rocket, which will use a less-powerful interim upper stage for an uncrewed Artemis 1 test flight around the moon with Orion.

So far, NASA has picked the company Maxar to build the power-and-propulsion element for its moon Gateway and Northrop Grumman to build the station's habitat module for astronauts. The Canadian Space Agency will provide a robotic arm, while Japan and Australia have signed on to work with the U.S. on Artemis.

But NASA still needs landers to get astronauts to the lunar surface, and the agency has turned to private industry for those vehicles.

At the 70th International Astronautical Congress in Washington, D.C., last month, billionaire Jeff Bezos announced that his space company, Blue Origin, had teamed up with Lockheed Martin, Northrop Grumman and Draper to build its entry for NASA's Human Landing System. But Boeing wasn't far behind.

At the same conference, Boeing teased its moon lander entry with concept art emblazoned on the company's exhibition booth. Boeing later released the artwork on Twitter. It shows four astronauts walking around what appears to be a solar-powered lander.

A second moon lander concept, released Tuesday, shows a boxy ascent module lifting off from its descent vehicle. Twin solar panels are mounted to the sides of the descent vehicle in the image.

"Any lander concept starts with the vast amount of experience Boeing's gained in developing the ISS and its myriad systems, as well as how to operate a vehicle reliably," Boeing spokesperson Jerry Drelling told Space.com in an email. "The demands of a lunar landing mission will require reliable, safe and compact life support systems, operating systems and propulsion systems."

Drelling said Boeing has extensive experience in those fields, gained over 60 years of working with NASA, including on the command and service modules of the original Apollo spacecraft.

"The design includes innovations in its engines, composites, and automated landing and rendezvous systems," Boeing representatives wrote in the statement. Some of those technologies were developed for the Starliner spacecraft.

Drelling also said Boeing is working with another company, Intuitive Machines, to develop the engine for the new lander. NASA has also tapped Intuitive Machines to build a robotic moon lander for a science mission to launch in 2021.

"Our partner, Intuitive Machines, is already test-firing an engine prototype designed for use in the lander system," Drelling said. "This prototype uses methane and oxygen rather than a hypergolic mix." Hypergolic-based systems use two propellants that ignite on contact.

Drelling added that the moon lander is one of several Artemis projects Boeing is working on; the others include a Gateway prototype and an uncrewed cargo ship concept. The company is also assembling the first SLS core stage and preparing for an uncrewed orbital test flight of its Starliner crew capsule on Dec. 17. Boeing launched a Starliner pad abort test Monday (Nov. 4).

And then, of course, there's the name. Boeing already has a Starliner, but its moonship is decidedly without a moniker.

"We don't have a name for it," Drelling said. "It would depend on NASA's contract terms which organization would get to name it."