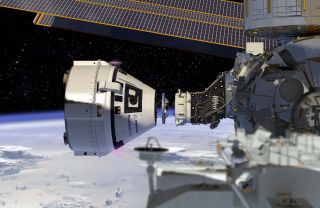 LAS CRUCES, N.M. — Boeing has set a new launch date for the first orbital flight of its new commercial crew vehicle that will soon begin ferrying astronauts to and from the International Space Station.

For this mission, titled "Orbital Flight Test" (OFT), the Starliner space capsule will launch from Cape Canaveral Air Force Station on an Atlas V rocket and dock with the International Space Station, where it will stay for about a week before making a parachute-assisted landing at the White Sands Missile Range in New Mexico.

Before Starliner makes its first trip to the space station, Boeing will first conduct a test of the spacecraft's abort system. That in-flight abort test, which is now scheduled to take place in on Nov. 4, will demonstrate Starliner's ability to return astronauts to safety in the event of an emergency on the launch pad or during the spacecraft's ascent.

Although Starliner has yet to reach orbit, SpaceX has already launched its Crew Dragon to the International Space Station for its first unpiloted test mission, called Demo-1, in March. However, both vehicles have faced delays in their development.

In July 2018, Boeing reported an "anomaly" had occurred during a test of one of the pad-abort engines, putting Starliner behind schedule. A few months later, Boeing announced that the OFT mission would be ready to fly in March, but it was delayed yet again due to a scheduling conflict with another Atlas V launch from the same launch pad, Boeing said. Meanwhile, NASA said it had been delayed to allow more time for testing and safety reviews.

SpaceX also recently faced its own "anomaly" with a Crew Dragon spacecraft that put the company behind schedule for its first crewed launch to the International Space Station. In April, during a routine test of Crew Dragon's SuperDraco escape engines, a Crew Dragon capsule (the same one that flew to the space station for the Demo-1 mission) exploded at SpaceX's test facility at Cape Canaveral Air Force Station in Florida, adding to the delays.

Benjamin Reed, SpaceX's director of commercial crew mission management, said the investigation into the accident is now wrapping up, and that SpaceX has already implemented changes to mitigate the cause of the explosion: a leaky valve. Both the Crew Dragon vehicle and the Falcon 9 rocket that will be used for the in-flight abort test have arrived at the launch site, launch complex 39A at NASA's Kennedy Space Center in Florida, Reed said. And if all goes according to plan, SpaceX could launch its first crew of astronauts to the space station in 2020.