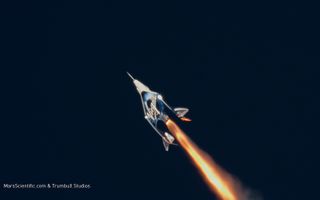 An aerospace titan is putting some money into one of the leading lights of the nascent space tourism industry.

Boeing will invest $20 million in Virgin Galactic, which plans to begin flying paying customers to suborbital space and back in the near future, representatives of both companies announced today (Oct. 8).

"This is the beginning of an important collaboration for the future of air and space travel, which are the natural next steps for our human spaceflight program," Virgin Galactic founder Sir Richard Branson said in a statement. "Virgin Galactic and Boeing share a vision of opening access to the world and space, to more people in safe and environmentally responsible ways."

Boeing's investment will net the company new shares in Virgin Galactic. The deal is not yet final; it will become official once Virgin Galactic becomes publicly listed via a business combination with Social Capital Hedosophia Holdings Corp. That transaction is expected to occur before the end of the year, Boeing representatives said.

Boeing has been a key player in the United States' human spaceflight program for more than half a century. The company built the first stage of NASA's mighty Saturn V moon rocket, for example, and is currently the the space agency's prime contractor for the International Space Station (ISS). Boeing also holds a multibillion-dollar NASA contract to fly astronauts to and from the orbiting lab, which the company will do using a capsule called the CST-100 Starliner. (SpaceX scored a similar deal and will fly astronauts on its Crew Dragon capsule.)

Virgin Galactic is making a name for itself as well. The company has already flown people to space twice aboard its latest SpaceShipTwo suborbital space plane, VSS Unity, on test flights in December 2018 and February 2019.

Unity's interior is being touched up at Virgin's manufacturing facilities in Southern California, company representatives have said. Once that work is done, the space plane will head to Spaceport America in New Mexico, the center of Virgin's commercial operations, to start the final phase of its testing program.

The company hasn't said when it plans to commence operational flights, but that milestone is likely not too far off.

A ticket to ride the six-passenger SpaceShipTwo currently sells for $250,000. More than 600 people have put down deposits to reserve a seat, Virgin Galactic representatives have said.

Neither Boeing nor Virgin Galactic gave additional details about the planned partnership, though Boeing representatives said further information about "specific projects to be pursued" will be shared in the future.

"Boeing's strategic investment facilitates our effort to drive the commercialization of space and broaden consumer access to safe, efficient, and environmentally responsible new forms of transportation," Brian Schettler, senior managing director of Boeing HorizonX Ventures, said in the same statement. "Our work with Virgin Galactic and others will help unlock the future of space travel and high-speed mobility."