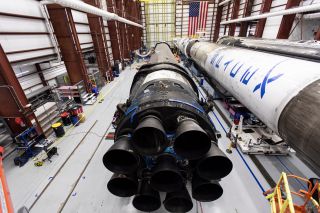 The used Falcon 9 rocket that will launch SpaceX's Crew Dragon in-flight abort test is at NASA's Kennedy Space Center in Cape Canaveral, Florida for a launch in November 2019.
(Image: © NASA)

A key safety test of SpaceX's Crew Dragon astronaut taxi could occur as early as next month, Elon Musk said.

The test is an in-flight abort (IFA), which will demonstrate Crew Dragon's ability to get out of harm's way in the event of a launch emergency. During the IFA, a Crew Dragon will launch atop a SpaceX Falcon 9 rocket from NASA's Kennedy Space Center in Florida. Shortly after liftoff, the capsule will fire up its SuperDraco escape thrusters, which will blast Crew Dragon a considerable distance away from the rocket.

Both the spacecraft and the booster needed for the test are already at SpaceX's facilities in Cape Canaveral, so we shouldn't have to wait much longer for the IFA, Musk said.

"All hardware is at the Cape. Need to do static fire and reconfigure for flight. Launch probably late Nov / early Dec," he tweeted on Tuesday (Oct. 8).

All hardware is at the Cape. Need to do static fire and reconfigure for flight. Launch probably late Nov / early Dec.October 8, 2019

The IFA is a critical milestone on Crew Dragon's path to crewed flight, which both SpaceX and NASA want to happen soon. SpaceX holds a $2.6 billion NASA contract to ferry American astronauts to and from the International Space Station using the capsule and the Falcon 9.

That deal was announced in September 2014, as was a similar one that NASA signed with Boeing, which is developing a capsule called CST-100 Starliner. At the time, NASA officials said they wanted at least one of these private vehicles to be up and running by the end of 2017.

NASA is eager to stop buying seats aboard Russian Soyuz spacecraft, which have been the only ride to orbit for astronauts of any nationality since the space shuttle fleet was grounded in July 2011. Seats aboard the three-person Soyuz currently sell for around $85 million apiece, NASA Administrator Jim Bridenstine said recently.

A Crew Dragon has visited the ISS once before, on a historic uncrewed mission this past March known as Demo-1. That same capsule was slated to perform the IFA test as well, but the vehicle was destroyed in April during a ground test of the SuperDraco abort system, pushing SpaceX's timelines back.

The next big milestone after the IFA is Demo-2, a test flight that will carry NASA astronauts Bob Behnken and Doug Hurley to the orbiting lab and back. Operational, contracted missions will start sometime after that.

It's unclear when Demo-2 will fly; NASA stopped publishing target dates for any big SpaceX and Boeing commercial-crew milestones in July, shortly after Bill Gerstenmaier, the longtime head of the agency's Human Exploration and Operations Mission Directorate, was reassigned.

But Demo-2's launch may not be too far off at this point, Musk suggested in another Tuesday tweet.

"For what it’s worth, the SpaceX schedule, which I’ve just reviewed in depth, shows Falcon & Dragon at the Cape & all testing done in ~10 weeks," he said via Twitter. Musk was responding to a tweet by Ars Technica's Eric Berger, who reported that a source described "full panic" ensuing as NASA grapples with the prospect that Crew Dragon and Starliner may not be operational by the first half of next year.