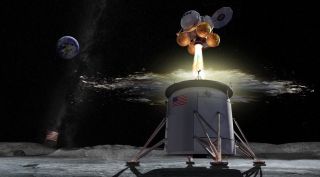 NASA's draft plans for lunar lander development call for the use of public-private partnerships to develop landers, starting with a version that can host two astronauts on the moon for six and a half days in 2024.
(Image: © NASA illustration)

WASHINGTON — As NASA celebrated the 50th anniversary of the first crewed landing on the moon, the agency released new details about how it will procure landers to enable humans to return to the moon in the 2020s.

NASA released July 19 a presolicitation notice for its Human Landing System Integrated Lander effort, part of the Next Space Technologies for Exploration Partnerships (NextSTEP) program. The notice included a draft version of a broad agency announcement, with NASA requesting industry comments on it by Aug. 2.

The draft solicitation offers some new details on NASA's approach to developing landers capable of carrying humans to the surface of the moon and back, and do so in time to meet the 2024 established by the White House earlier this year and reaffirmed by Vice President Mike Pence in a July 20 speech marking the 50th anniversary of the Apollo 11 landing.

NASA's plan, as described in the solicitation and supporting documents, calls for a two-phase approach for lunar landers. The first phase will support development of an initial, basic lander design for a "demonstration mission" in 2024, capable of carrying two astronauts to the lunar surface, staying there for six and a half days before returning to the lunar Gateway, which NASA has said will serve as the staging point for lunar lander missions.

That lander would be used as part of the Artemis 3 mission, the second crewed flight of the Orion spacecraft. NASA envisions the lander flown first to the Gateway on one or more commercial launch vehicles, depending on the configuration the company developing the lander selects for it. Two astronauts would board the lander to go to the south polar regions of the moon, while the other two astronauts would remain on the Gateway.

An option in the NextSTEP award would allow the company to develop an enhanced version of the lander for later missions, starting with a demonstration mission in 2026. That enhanced lander would include the ability for longer stays on the lunar surface, including through the two-week lunar night, as well as hosting four astronauts and additional cargo. It would also be at least partially reusable, a requirement not levied on the initial design for the 2024 mission.

NASA plans to pursue development of the integrated landers through a public-private partnership approach, which the agency says in the draft solicitation is "part of creating a sustainable lunar exploration program." Companies that ultimately submit proposals have to demonstrate they are contributing at least 10 percent of the total cost of lander development. NASA also doesn't plan to take ownership of the lander or landers it ultimately procures, in line with past statements by agency leaders that it is interesting in acquiring services rather than buying hardware.

According to the solicitation, NASA plans to select up to two companies to develop the initial landers for the 2024 mission, likely from a larger group awarded 12-month study contracts. NASA says that the values of awards for this program "are estimated be to be in the hundreds of millions of dollars," although it wasn't clear what phases of development — initial studies only or also development of landers — that included. The total funding available for the program is listed only as "TBD" or "to be determined."

The procurement filing doesn't disclose when NASA expects to release the final version of the solicitation. The draft document, though, says NASA expects to make awards in November, a schedule is acknowledges could be affected by "reduced appropriations or continuing resolution."

The language in the draft solicitation mirrors what NASA Administrator Jim Bridenstine told members of the Senate Commerce Committee at a July 17 hearing. "In my view, we should have three commercial landers that are receiving support from commercial industry," he said. "And then, as time goes on, downselect to two." He added that some unidentified companies had offered to pay 30 percent or more of the total cost of landers because of their interest using those landers for non-NASA customers.

That approach, he said, keeps companies "motivated" in order to be one of the two ultimately funded for lander development. "That mitigates risk," he added, "because if something goes wrong with one, the others go forward, and we can stay on schedule."

NASA announced plans for this effort, formally known as NextSTEP Appendix H, after deciding that to meet a 2024 deadline it needed to have companies propose full lander systems, rather than individual elements. NASA had previously called for proposals for studies of descent and transfer stages for a lander through NextSTEP Appendix E, selecting 11 companies in May for studies at a cost to NASA of $45.5 million.

Among those 11 companies is Blue Origin, which received the NextSTEP Appendix E award a week after unveiling the updated design of its Blue Moon lander. The company said that lander, initially designed for cargo, could also be developed into a crewed lander in time to meet the 2024 deadline.

Patrick Zeitouni, acting lead of advanced development programs at Blue Origin, said in a July 18 talk at the NewSpace 2019 conference in Renton, Washington, that the company had recently completed a six-minute "full-duration" test firing of the BE-7 engine that the company is developing for Blue Moon. "That means we're getting a whole lot closer to getting that engine fielded," he said.

He didn't explicitly say in his remarks if Blue Origin would pursue the upcoming NextSTEP Appendix H competition, but did state that the company was "very excited" about the administration's goal of landing humans on the moon by 2024. "We're very excited to be getting going, to be actually moving forward, on landing by 2024," he said. "We're just pumped. We want to get going."