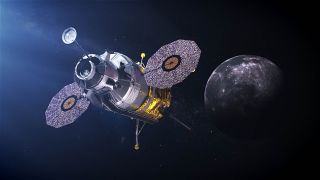 An artist's illustration of NASA's Artemis moon lander fly astronauts to the moon by 2024.
(Image: © NASA)

NASA really wants to fly astronauts to the moon by 2024. But it needs landers to do it, and now the space agency has opened the doors for private companies to build those moonships.

The U.S. space agency on Monday (Sept. 30) announced that it's officially seeking proposals for commercial human-rated landers under its Artemis program. The call came in the form of an official solicitation for a "human landing system" that itself follows two draft versions released in July and August.

The deadline for all applications: Nov. 1.

The first company to complete its lunar lander will be the one to land NASA astronauts on the moon in 2024, NASA officials said in a statement. Second place gets a 2025 mission, they added.

"Heads up to industry: Our final call for American developed Artemis landers is here!" NASA Administrator Jim Bridenstine announced on Twitter Monday. "Kudos to the NASA team & companies rising to the challenge to return humans to the moon by 2024. We can't wait to see your proposals."

Spaceflight hardware can take anywhere from six to eight years to develop, the agency wrote in a statement. But after floating the earlier draft versions of the solicitations this summer, many potential industry partners have already had a chance to see NASA's requirements, the agency said.

In other words, if interested commercial companies have done their Artemis homework, they should be ready, according to NASA.

"In order to best accelerate our return to the moon and prepare for Mars, we collaborated with industry on ideas to streamline the procurement process,” said Marshall Smith, NASA's director of the Human Lunar Exploration Program at the agency's headquarters in Washington, D.C., in the statement. "The private sector was eager to provide us feedback throughout this process, and we received more than 1,150 comments on the draft solicitations issued over the summer."

Based on those comments, NASA trimmed some requirements that might slow lunar lander development. For example, the agency cut the number of reports a company will have to provide on its lander, once set at 116, down to just 37.

"Reports still are valuable and necessary, but to compromise and ease the bulk of the reporting burden on industry, we are asking for access to the companies' systems to monitor progress throughout development," said Nantel Suzuki, NASA's Human Landing System program executive at headquarters. NASA engineers will be available to work with its commercial lander contractors, and proposals should include a collaboration plan, Suzuki added.

Another moon lander change from NASA: the removal of a refueling capability.

Originally, NASA wanted a moon lander that could be refueled so that it could be used repeatedly to explore more of the lunar surface. But some industry representatives balked at that requirement, NASA officials said.

"They were absolutely right," said Lisa Watson-Morgan, Human Landing System program manager at NASA's Marshall Spaceflight Center in Huntsville, Alabama, in the statement. "We are operating on a timeline that requires us to be flexible to encourage innovation and alternate approaches. We still welcome the option to refuel the landing system, but we removed it as a requirement."

NASA's tight timeline to return astronauts to the moon was a recurring theme in Monday's call for lunar lander proposals.

The push to return to the moon by 2024 was ordered by the Trump administration in March, when Vice President Mike Pence announced the deadline and called on NASA to transform itself into a "leaner, more accountable and more agile agency."

Pence, speaking March 26 at the fifth meeting of the National Space Council, called on NASA to accelerate its moon plans "by any means necessary," a term the space agency echoed in its Monday announcement. Quoting Pence in all but name, NASA cited that those words to signal that it was open to any ideas to reach the moon 2024.

NASA's Artemis moon plan currently centers on launching astronauts into space on Orion space capsules using a new megarocket called the Space Launch System. The lunar lander, meanwhile, would launch separately and rendezvous with the Orion at Gateway, a way station for astronauts in orbit near the moon.

Now, NASA says that doesn't necessarily need to be the final plan.

"NASA wants to explore all options to achieve the 2024 mission and remains open to alternative, innovative approaches," the space agency said in Monday's statement.

NASA's call for lunar lander ideas from private companies comes one week after the agency ordered a fleet of Orion spacecraft from manufacturer Lockheed Martin.

On Sept. 23, NASA announced an agreement with Lockheed to provide at least six Orion spacecraft, and possibly up to 12 of the vehicles, for future moon missions.

Those spacecraft would be used for NASA's Artemis III missions and beyond. Artemis I will be NASA's first uncrewed Orion mission around the moon using an SLS rocket. Artemis II would be the first crewed flight.