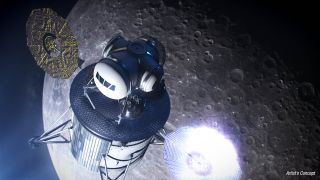 Artist's illustration of a moon lander capable of ferrying humans to the lunar surface.
(Image: © NASA)

With private companies setting their sights on sending humans to the moon in the near future, it's possible that one could touch down on the lunar surface before NASA astronauts do.

But the resulting "public versus private" space race isn't one that NASA feels overly competitive about. The space agency's plans to reach the moon involve relying on private corporations rather than challenging them.

"The challenges differ for the public and private sector, though they all do come down to money," Wendy Whitman Cobb told Space.com by email. Whitman Cobb, an associate professor at the U.S. Air Force's School of Advanced Air and Space Studies, examines the institutional dynamics of the policymaking behind space exploration. She stressed that her views are her own and do not necessarily reflect those of the Air Force or Department of Defense.

"Technology is not a problem for either sector — the ability to get to the moon has existed since the 1960s," Whitman-Cobb said. "What is different is the will to do it."

NASA's current lunar push kicked into high gear in December 2017, when President Donald Trump signed a space-policy directive to send humans to the moon and establish a sustainable presence there. Earlier this year, Vice President Mike Pence told NASA to put boots on the moon by 2024, rather than the previous goal of 2028.

NASA's Artemis program aims to reach that goal. (In Greek mythology, Artemis was the twin sister of Apollo and goddess of the moon.) The agency's Orion spacecraft will carry human explorers to the Gateway outpost, a small space station that NASA plans to start building in lunar orbit in the early 2020s. Landers will then carry astronauts from the Gateway to the lunar surface.

The space agency won't be hitting these goals on its own. "We're already partnering with our commercial partners to build these systems, and later on we'll continue to work with our international partners to build up the Gateway," Marshall Smith, director of the human lunar exploration program at NASA's headquarters in Washington, told Space.com by email.

The space agency is currently working with 11 companies on Gateway and its associated systems. In May 2019, NASA awarded a contract to Maxar Technologies to build, launch and demonstrate in space the first major Gateway piece — the Power and Propulsion Element. The space agency also announced then that it had signed contracts with three companies to carry experiments to the moon via small robotic landers (though one of those three recently dropped out).

In June, NASA asked industry to figure out ways to deliver cargo to the Gateway — much like the companies SpaceX and Northrop Grumman make robotic resupply runs to the International Space Station.

In addition to working with private companies, NASA is also cooperating with other countries on the Artemis program. "International partners are a vital part of our lunar plan and will contribute to the goal of creating a sustainable lunar presence by 2028," Smith said.

But private industry isn't solely focused on helping NASA make it to the moon. Companies like SpaceX and Blue Origin have stated their intentions to design their own lunar exploration programs.

Elon Musk's SpaceX is currently working on a 100-passenger vehicle called Starship, which the company envisions carrying people to the moon and Mars. Starship will be lofted off Earth's surface by a huge rocket called Super Heavy. SpaceX already has one Starship-Super Heavy passenger flight planned for 2023. The company hopes to begin commercial operations of the pair as early as 2021, most likely with commercial satellite launches.

Bezos sees many potential customers for Blue Moon other than NASA. "People are very excited about this capability to soft-land their cargo, their rovers, their science experiments on the surface of the moon in a precise way," Bezos said at the lander's unveiling in May 2019. "There is no capability to do that today."

"Our vision is really to expand Earth's economic and social sphere to include the moon," Alain Berinstain, Moon Express' vice president of global development, said last year at a lunar-science workshop at NASA's Ames Research Center in California. "We see the moon as the Earth's eighth continent to explore and to also mine for resources, like we have with every other continent on Earth."

Pittsburgh-based Astrobotic planned to launch its Peregrine lander to the moon in 2019, but that date has since been since pushed back to 2020 or 2021. "We're really, at Astrobotic, trying to do this the right way, meaning that we're trying to be as technically rigorous as possible," Dan Hendrickson, vice president of business development at Astrobotic, said at a Washington Space Business Roundtable in February. "We're trying to be very upfront with the entire community about our current status."

As with NASA, private industry has sufficient access to the technology to get to the moon, Whitman Cobb said. "They also have to demonstrate that their systems are fundamentally safe and reliable in order to attract paying customers — they are a business, after all," she said.

Private companies also tend to have a leaner leadership structure than NASA's 60-year-old legacy brings with it. "NASA's bureaucracy has stagnated since the 1960s," Whitman Cobb said. That makes it "more difficult for NASA to contract, make changes and adapt to new circumstances."

On the other hand, private companies have demonstrated the ability to move through technology development at a rapid rate, incorporating design and technology changes "almost immediately," she said. That brings its own advantages.

To the moon — without NASA?

For NASA, a return to the moon may bring its own difficulties. After President Trump called for a return to the moon, the space agency developed a goal to arrive by 2028. Not content with a 10-year plan, the administration challenged NASA to get it done by  2024 — within President Trump's second term, should he win re-election. The agency has since ramped up its efforts (and has stressed that one of the 2024 moonwalkers will be a woman — the first to set foot on the lunar surface).

Trump is hardly the first U.S president to call for a return to the moon. In 1989, George H. W. Bush proposed an ambitious exploration plan calling for the construction of an Earth-orbiting space station, crewed lunar exploration and, eventually, crewed missions to Mars. According to NASA's History division, "White House and Congressional reaction to the NASA plan was hostile, primarily due to the cost estimate." Only a few years later, the Clinton Administration's 1996 National Space Policy removed human exploration from the national agenda.

In 2004, George W. Bush made another stab at a lunar program, with plans to put astronauts on the lunar surface as early as 2015 and no later than 2020. That plan was cancelled in 2010 when President Barack Obama decided to send astronauts to a near-Earth asteroid by 2025, to help prepare for eventual crewed journeys to Mars.

The shifting political winds may be the reason that Pence's challenge to return Americans to the moon stressed a 21st-century space race with Russia and China. But the idea of an international space race may have more to do with politics than facts.

"When the idea of a new space race is invoked, it's usually being done in a way to stoke political willingness to devote more money to space," Whitman Cobb said. There is no real evidence that either Russia or China has the ability to go to the moon in the near term, she added.

"On the other hand, if politicians and/or the public begin to be fearful of Russian or Chinese intentions, they might be more willing to spend money on Project Artemis to get Americans back to the moon by 2024," she said.

In the past, NASA may have been able to shift with the changing political landscape, but the addition of private lunar exploration may create a problem for the space agency.

"If private companies get to the moon first, it will likely cause an existential crisis for NASA," Whitman Cobb said.

"If private companies can do it, what do we need NASA for?" she added. "In other words, it will only matter who gets there first if NASA fails to get there."