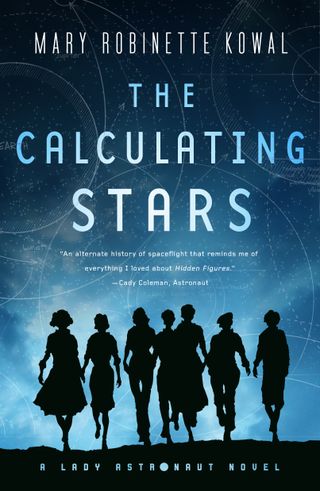 In the opening pages of Mary Robinette Kowal's new novel, "The Calculating Stars," an asteroid slams into the ocean near Washington, D.C., wiping out the federal government of 1952.

But in an era before mechanical computers, it takes a math whiz to realize that the trouble has only just started — that the water vapor flung into the atmosphere will cause first a short global winter, then cataclysmic climate change, and that humans had better figure out another planet to live on, and fast.

It's a backstory Kowal invented for a novelette called "The Lady Astronaut of Mars," which she calls "my homage to Ray Bradbury, but with 100 percent more women." But after completing that story, she realized she wasn't ready to leave Elma York, the main character of her feminist spin on space history. "I basically wanted to know what it would have taken for women to actually go into space in the era that Bradbury was writing in and about," Kowal told Space.com. "I kind of knew her backstory, but what is it that causes a woman to become the lady astronaut of Mars? She would have had to have been extraordinary." [Read an excerpt from Kowal's "The Fated Sky"]

Space.com talked with Kowal about "The Calculating Stars" and its sequel, "The Fated Sky," which was published in August. This interview has been edited for length and clarity.

Space.com: Where did the idea for these books come from?

Kowal: I joke that it's a punch-card punk universe, and that is basically coming from going to IBM with my dad when I was a kid. Everything was still on punch cards, and it was amazing, these giant rooms, and that's where my initial wonder about computing came from. … I started exploring women's early involvement in the space program and discovered that it was far more extensive than I had had any idea — I was writing these before "Hidden Figures" came out — and so it was this kind of constant revelation about how thoroughly embedded and essential women were. … I just really wanted to dig into that and also explore what would have happened if we had been trying to send people to space when we didn't have mechanical computers, when the only way to send a computer into space was to send a woman.

Space.com: What sort of research did you do to get the aerospace stuff right?

Kowal: I would often go and try to look those things up and open it and just go, "Hmm, well, I can see that the answer is here but I don't actually understand it, and the amount of information that I would have to have to understand it would require me to have a graduate degree." [So I hired a science consultant.] … I had multiple other people on tap, I had a couple of astronauts, I had a flight surgeon. There are parts of the book where I knew the emotional arc of the scene, and I knew that I needed the characters to be demonstrating competence in this scene, so I would say things like, "And then the captain turned to me and said [jargon] and I replied [jargon] as he [jargon]ed the [jargon]," and I would send it over to my astronaut friends and say,"'Could you just play Mad Libs?" So all the science in there that is correct is not me.

Space.com: Why did you choose to have all of space exploration be done through an international collaboration?

Kowal: Well, the International Space Station is not possible with a single country. Partly, it was that I was writing towards the future that I want to see. The other thing is that under the circumstances what I was thinking about were the times that really huge disasters have happened, specifically the events right after 9/11. … [I was] watching the way the entire planet rallied around the United States and the tragedy, and then the choices that the United States made that deepened a divide. There are choices that could have been made under a different leader that would have sent the world in a different direction — better? Who knows. But there are certainly examples of this historically, where a massive tragedy happens and "we all pull together" sticks as part of the national consciousness. I wanted to explore what would happen if we actually did move to a more cooperative future. The short answer is I'm trying to write toward a hopeful future.

Space.com: The books offer a very specific vision of an impetus for space exploration, with the meteor triggering climate change. Why did you choose that impetus?

Kowal: I did actually want to talk about climate change in the book. When I first started researching it, I did think that I was going to be talking about a winter, and then talking to the astronomer who worked with me [Lucianne Walkowicz], she told me about water strikes and the water vapor and the runaway greenhouse effect, and I realized, "Oh, these parallels are very exciting." The parallels that one can draw between history and contemporary [events] allow you to often have conversations about a thing that you are concerned about without some of the emotional baggage attached to it.

I have often wondered what the world would look like if we continued to throw money at the space program at the rate we were throwing it at during the Mercury and Apollo era. … I was looking for what would cause people to just keep throwing money at something — ginormous catastrophe combined with things are going to get worse seemed like that might do it. [Best Space Books and Sci-Fi for the 2018 Holiday Season]

Space.com: How did you balance historical fact about the 1950s and '60s with your fictional plot?

Kowal: One of the things about all of the headlines that I have in the novel is that with rare exception those are actual events that were happening. Frequently, they are taken straight from The New York Times, and I would often tweak them for the timeline or just for space. The things about disasters historically is that there are kind of two things that happen. One is that you will see a coming together of people that wouldn't normally come together, there is definitely a banding together to help people survive. The other thing that you seen in the aftermath of a disaster, when you've got shortages, is that the othering of people becomes more intense. Since this is happening in the heart of the civil rights movement, those two things would be happening kind of simultaneously along with all of the other pressures of the era. I was basically drawing on the history that actually happened and accelerating the timelines in some areas.

The other thing I did is that the book is about recovery from the Meteor and getting into space, that's the plot. All of the other things affect the way my characters move through the world, but they are not plot points. My character is never going to solve racism because that's unfortunately not actually a thing that anyone has solved. She's not gonna solve sexism — it's the 21st century, thank you, we still have that.

Space.com: You touch on a lot of different "-isms" in the books — gender issues, race, mental health, disability, religion, environmentalism, LGBTQ+ issues. How did those threads come together for you?

Kowal: Until people started asking me, I hadn't actually thought about it as 'I am talking about these things,' with the exception of the mental health, that was a deliberate plot thread. But the other things, I was just not ignoring them. The example that I give is that my husband is 5' 11" and I am 5' 7", so when we go into the kitchen, he can reach things on the top shelf, I have to get a step stool. I don't go through life going, "Oh, if only I weren't 5' 7", if I could be 5' 11"." I just get a step stool; it affects the way I move through the world.

What I did here was that I just had my character being affected by moving through the world. The fact that she's Jewish and is exposed to many of the bigotries that affect other populations, although unless she brings it up, she is capable of passing, means that she's able to occupy both spaces. … I feel like one of the aspects of having representation is that the characters are allowed to just exist within the story; that various aspects do affect the way they move through the world, but that they aren't plot points. For me, what that means is that all of these threads are embedded in the lives that we all live, it's just that many of us have the ability to pretend that they aren't. As an author, I made the choice to not ignore them. … If I just put the character in and say "This character is trans," and it doesn't actually affect the way he moves through the world, then it's not actually representing.

Space.com: Can you talk more about planning from the outset to include mental health?

Kowal: [People say] that Elma is unbelievable, because how could someone who can land an airplane that's in the process of crashing be afraid of talking in front of people, and they don't know anyone like that. And what I want to say to them is, "You probably actually do, but people with social anxiety are really good at masking it and they are phenomenal in a crisis." I don't have anxiety but I have very close friends and family who do, and they are amazing in a crisis because their body is like, "Oh, stress hormones, whatever I deal with that every day." … [Kowal describes being diagnosed with depression in her 40s and realizing she had it all her life, but that stigma had stopper her from dealing with it.] I wanted to write someone who had a condition, a mental health issue, that was allowed to actually just still have adventures.

Space.com: Are more Lady Astronaut novels on the way?

Kowal: There are two additional books. I'm writing book three right now … "The Relentless Moon," which is a parallel novel to the events that happen while Elma is off on the Mars mission, and it's with Nicole Wargin and what's happening with the moon. … The fourth book in the series will be called "The Derivative Base" and it picks up after the epilogue of "The Fated Sky," so it's 100 colonists on Mars. … It'll be fun, it's basically frontier life on Mars.

Space.com: Is there anything you hope readers take away from the series?

Kowal: Actually, a sense of hope, I guess — that we do have power as individuals to make change, and that the choices that we make in how we interact with each other can affect the larger picture. We talk about wanting societal change, but we are society and that change has to begin with us, and it has to begin with us having hard conversations with each other — but also being kind.