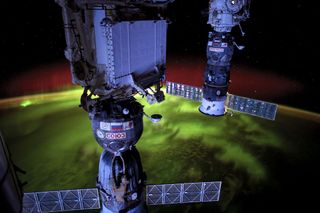 An image taken from the International Space Station.
(Image: © Courtesy of Don Pettit/NASA)

"Space Stations: The Art, Science, and Reality of Working in Space" (Smithsonian Books, 2018) is a stunning new book, released Oct. 30, that combines striking images with captivating space history to tell the tale of space stations throughout history, covering everything from Sputnik to Walt Disney and the to-be-seen future of space stations.

Space.com caught up with Robert Pearlman, a space historian and Space.com contributing writer as well as one of the authors on the new book, which combines the authors' expertise to stretch from pop culture and comics to technical specifications.

"The book came together as an idea of how to tell the history of what's become a major focus of space exploration — how we live and work in space and how that's been envisioned even before we sent anything into space and where that might go into the future," Pearlman told Space.com. The book opens with a foreword from NASA astronaut, aquanaut and artist Nicole Stott, who remarks on the long and brilliant history of humanity's presence in space. [Far Out NASA Space Station Concepts from the Past!]

Pearlman wrote in a collaboration with, Ron Miller, a space artist and science fiction illustrator and author, and Gary Kitmacher, who has worked for NASA's Johnson Space Center since 1981. The authors' varied experiences contribute to a book that serves as a comprehensive tour of space stations through the years.

Some might think that the International Space Station, which houses astronauts in space, is the extent of humanity's history building and using space stations. But this book shows just how long we have been planning, designing and building space stations and just how varied they have been.

Pearlman, citing the Soviet Union's Salyut program and the United States' Skylab, remarked that "those early efforts established the baseline for how we would create the International Space Station."

Additionally, there are a variety of lesser-known pieces of history discussed in the book. For example, Walt Disney worked with German rocket scientist Wernher von Braunon the "Man in Space" television program that was tied to the "Tomorrowland" section of Disneyland, which he was building at the time. Disney felt that communicating about spaceflight to the public with this program could help the public to better understand "Tomorrowland," the book explains.

The book doesn't just cover missions and collaborations with scientists, however. It begins before humans had ever traveled to space and reaches far past what we've so far accomplished. This book begins by exploring the earliest ideas about space and space stations, from early astronomy to cartoons to science fiction. It showcases brilliant artwork, including original space station designs, cartoons and spectacular photographs of the International Space Station and humanity's space station attempts throughout history.

After journeying through history, leaving no stone unturned, the team of authors leaves the reader with a look at what humanity's presence in space might resemble in the future. From commercialization to inflatable structures and space colonies, the book dives deep into what we think and hope our role in space might be in the near and far-flung future.

"If there is a surprise to be had," Pearlman said about the book, "it's that we've been at this for so long … trying to develop a permanent platform in low Earth orbit as such that there will always be humans in space. Hopefully, we will never have another day in anyone's lives when we will not have humans in space."

"Space Stations: The Art, Science, and Reality of Working in Space" is available for purchase on Amazon.com.