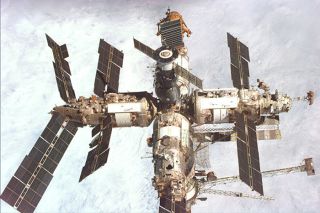 Thirty years ago, the Soviet Union launched the core module for the space station Mir. Mir was the first modular space station assembled in orbit, finally completed in 1996. The spacecraft tripled its expected five-year lifespan, operating for more than 15 years, and even outlived the U.S.S.R.

During its time in orbit, Mir had a checkered history, both a pioneer for its many breakthroughs but also a problem child, with a history of power failures, trash buildup, hygiene concerns, a fire and an in-orbit collision. Even with its achievements now eclipsed by the International Space Station (ISS), the Mir still set an important precedent for international cooperation and made invaluable contributions to the science of space travel.

The name "Mir" translates to "world" or "peace" in English. In its original use, the word "Mir" represents a village, a traditional community "with common goals and values in a place where they had a better chance of surviving, living a productive life, and succeeding as a group," former director of the Shuttle-Mir program Frank L. Culbertson, Jr. recounted in 1996.

That sense of cooperation appropriately characterized life on the space station. Although Mir was a Russian space station, it hosted more than 100 space travelers from a dozen countries around the world, including France, Germany, Japan and even Afghanistan.

American astronauts first arrived on Mir nearly a decade into its life. The post-Soviet collapse had left both the American and Russian space programs in jeopardy, as the Americans lost their main competitor in the space race and the Russians suffered economic collapse. In order for NASA and Roscosmos, the successor to the Soviet space program, to salvage their own separate plans for next-generation space stations, the two had to work together to focus their efforts on a collaborative project.

"Phase One" of the cooperation between the United States and Russia was the Shuttle-Mir program, which brought both astronauts and cosmonauts on board the space shuttle for several missions to Mir and back. "Phase Two" was the construction of the ISS itself.

Mir brought together in space what were rival nations on Earth. It also provided an invaluable window into the potential for long-duration spaceflight.

The space station set a number of records for time spent in space. Cosmonaut Valeri Polyakov in 1995 achieved a record 437 days, 17 hours and 38 minutes for a continuous-orbit stay aboard Mir. A year later, astronaut Sharon Lucid set the endurance record for women with 188 days and 4 hours in orbit. Their experiences provided a window into the physiological and psychological effects of extended space missions.

Mir also hosted experiments aimed at sustaining life in space. The station raised wheat, the first crop to be grown from seed to seed in outer space. So if humans ever do find a need to grow, say, potatoes on another planet, space travelers will have Mir to thank.

On March 23, 2001, Mir met its end when Russia's space agency allowed the station to deorbit, leading the 134-ton structure to break up and crash over the Pacific Ocean. The space station may be in pieces at the bottom of the sea, but its legacy, which lives on in the ISS and future space stations yet to come, remains intact.