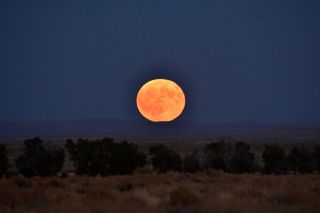 With unseasonably warm summer temperatures persisting over much of the world this year, it seems hard to believe that this is the week of the Harvest Moon, the full moon nearest to the autumnal equinox.

Saturday, Sept. 22, was the first official day of autumn in much of the Northern Hemisphere, even though it will still officially be summer through the daylight hours. The moment of the equinox — the official end of summer and beginning of autumn — will not arrive until 9:54 p.m. EDT. East of the prime meridian, where the equinox occurs after midnight, the first day of fall will actually be on Sunday (0154 GMT, Sept. 23).

The moon will officially turn full two nights later, on Monday (Sept. 24), when it will reach the spot in the sky opposite (180 degrees) to the sun. That moment will occur at 10:52 p.m. EDT (0252 GMT on Sept. 25). The moon will slowly wane thereafter, making this upcoming week one that will be rich in moonlight.  [The Moon: 10 Surprising Lunar Facts]

This year's version of the Harvest Moon falls in September, although on occasion, this branding can be conferred upon the October full moon. From 1970 to 2020, this calendrical oddity happens a dozen times and in fact happened just last year. The Harvest Moon can occur as early as Sept. 8 (as in 2014) or as late as Oct. 7 (as in 1987).

Moonrises with the least delay

Our solar day is 24 hours long. In the sky, the moon appears to move eastward against the background stars faster than the sun does. So, the "lunar day" — the interval of time that is measured for the moon to make one passage across the celestial meridian to the next — averages 24 hours and 50 minutes. In addition to the meridian crossing, the rising of the moon is delayed an average of 50 minutes from day to day. Variations from that 50-minute average can sometimes be quite noticeable, particularly around the time the moon near its full phase is rising.

Many incorrectly suppose that the Harvest Moon remains in the night sky longer than any of the other full moons we see during the year, but that is a fallacy; the full moon remains in the sky longest around the time of the December solstice. But close to the autumnal equinox, in the days surrounding the moon's full phase, the natural satellite rises from night to night with the least delay, as observed from our northern latitudes. It rises about the time the sun sets. But at this time of year, instead of rising close to its normal average of 50 minutes later each day, the moon gives the impression that it's rising at roughly the same time each night.

The reason for the recurrent seasonal factor the moonrise this time of year is that the moon appears to move along the ecliptic in our sky. And at this particular time of year, the ecliptic makes its smallest angle with respect to the eastern horizon, so the rising moon appears as if it is moving along a ramp for several days, while it's centered on full phase. [Harvest Moon Photos: Amazing Full Moon Views]

As an example, from latitude 40 degrees north, if we examine the three-night span around full phase (Sept. 23-25), moonrise occurs, on average, 29 minutes later each night. If you head farther south, the night-to-night difference increases. For Brownsville, Texas, located at latitude 25.9 degrees north, moonrise for this same three-day interval comes 36 minutes later each night. Conversely, as you head north, the difference becomes noticeably smaller. For London (latitude 51.5 degrees north), the average night-to-night difference amounts to just 22 minutes.

In contrast, for those living in the Southern Hemisphere, the ecliptic at this time of year appears to stand almost perpendicular to the eastern horizon. So, the average 50-minute-per-night difference for the time of moonrise is exceeded. For Auckland, New Zealand (latitude 36.9 degrees south), for instance, the night-to-night difference amounts to 57 minutes.

Interestingly, for those who live near the Arctic Circle (latitude 65.82 degrees north), the moon does indeed appear to rise at nearly the same time each night around the time of the Harvest Moon (just 3 minutes later each night). And for those who live even farther to the north, a paradox: The moon appears to rise earlier! At Prudhoe Bay, Alaska (latitude 70.3 degrees north), the local time of moonrise on Sept. 23, 24 and 25 will be, 8:35 p.m., 8:28 p.m. and 8:21 p.m., respectively. So, for the 2,174 inhabitants of this community located on Alaska's North Slope, the moon will seem to rise an average of 7 minutes earlier each night.

Origin of the Harvest Moon

So, by all of the natural signs in the heavens, the time of autumn harvest is with us again. The term Harvest Moon traces back to preindustrial times, when farmers — lacking the technology available today — were pressed by the season and welcomed a moonlit week to stretch the shortening daylight hours. Their fields had to be harvested before the farm could be bundled up for the impending winter season. Crops had to be housed. Firewood had to be cut. The daylight hours were rapidly diminishing at this time of year; seemingly, there was not enough time for all the chores that needed to be done in the sun. The Harvest Moon was a welcome lantern in the early evening sky. [Full Moon Names 2018: From Wolf Moons to Cold Moons]

This year, it's merely a beautiful late September moon that will provide a series of bright moonlit nights at a time when the seasons are at the turn. The next full moon, on Oct. 24, will be the Hunter's Moon, traditionally touched with frost and framed in the glorious colors of autumn leaves.

The seasons march on. Summer wanes and comes to its end with this weekend's waxing moon.

Editor's note: If you snap an amazing photo of the Harvest Moon full moon or any other night sky target and you'd like to share it for a possible story or image gallery, please contact managing editor Tariq Malik at spacephotos@space.com.

Joe Rao serves as an instructor and guest lecturer at New York's Hayden Planetarium. He writes about astronomy for Natural History magazine, the Farmers' Almanac and other publications, and he is an on-camera meteorologist for Verizon FiOS1 News in New York's lower Hudson Valley. Follow us @Spacedotcom, Facebook and Google+. Original article on Space.com.