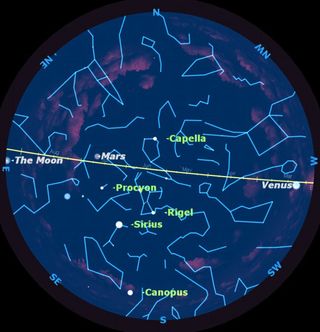 Bright planets and the moon mark way stations along the ecliptic as seen from Miami, Florida, just after sunset on February 28.
(Image: © Starry Night Software)

The ecliptic is the path the sun, moon, and planets take across the sky as seen from Earth. It defines the plane of the Earth's orbit around the sun.

The name "ecliptic" comes from the fact that eclipses take place along this line.

This imaginary line can best be visualized in the days just before full moon, especially when there are bright planets in the sky. This week is a fine example.

This discrepancy explains why we don't get eclipses every month. Because the plane of the moon's orbit is slightly different from the plane of the Earth's orbit, the moon usually passes above or below the sun or the Earth's shadow, except close to where the two orbits cross, and an eclipse is avoided.

This year, the orbits of the Earth and moon intersect on June 25 and Dec. 29, so eclipses can only occur within a month or so of these dates.