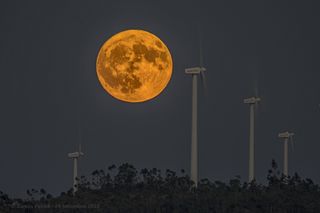 The full "Harvest Moon" occurs Sept. 14, at 12:33 a.m. EDT (0433 GMT), a day after it reaches apogee, the farthest point from Earth in its orbit. Because the moon appears slightly smaller when it's farther from Earth, a full moon at apogee is sometimes called a "minimoon."

The full moon occurs when the moon is directly between the Earth and sun. About every 29.5 days the sun and moon are 180 degrees apart in Earth's sky, and the side of the moon facing Earth is fully illuminated. Even though the moon is mostly grayish, the reflected light is so bright the moon can look whitish or even yellow, depending on the atmospheric conditions.

Related: See the Harvest Moon of 2018 in These Gorgeous Photos!

The full moon is usually so bright that even from a dark-sky site away from city lights, it will drown out fainter stars and deep-sky objects such as nebulas. Even so, the September sky offers some good views of brighter planets.

For observers in New York City on the evening Sept. 13, by about 8 p.m. the almost-full moon will be in the eastern sky, in the constellation Aquarius, and appearing to the right and downward from the "circlet," an asterism in Pisces. However, both constellations are relatively faint, and the bright moon will drown out many of their stars.

Turning to the south, observers will see Saturn and to the west of that (on the right) Jupiter. Saturn will be in the constellation Sagittarius while Jupiter is in Ophiuchus, just above and to the left of the bright star Antares. As Antares is notable for its red-orange hue, it makes an easy orientation spot for Jupiter, which is more yellow-white.

From New York City, Jupiter sets at about 11 p.m. local time on Sept. 13. By midnight Saturn will be with a few degrees of the southwestern horizon — the ringed planet sets at 1 a.m., according to heavens-above.com calculations.

When the moon reaches its fullest phase at 12:33 a.m. local time in New York City, Taurus will be over the eastern horizon along with the star Aldebaran and the Hyades star cluster. With a good eye and clear weather one can also spot the Pleiades star cluster, also known as the Seven Sisters, which is northwest of Aldebaran — as Taurus rises the small cluster of stars will appear to be above Aldebaran, in a nearly vertical direction.

By 3 a.m. the naked-eye planets will have set but the constellation of Orion and its famous belt of three stars will be above the horizon in the east. The stars that make up Orion's belt (Alnitak, Alnilam and Mintaka, from left to right), the bright star Betelgeuse (Orion's left shoulder from the point of view of an observer), and Rigel (Orion's right foot) should all be visible even with the full moon.

Other planets won't be visible because at that point in September they are all too close to the sun. On Sept. 14, Mars rises at 6:17 a.m. local time in New York City, while the sun follows at 6:35 a.m., so the planet will be almost lost in the glare. (It is very dangerous to try and observe planets that are so close to the sun, so one should never attempt it without proper equipment). Mercury and Venus, both above the horizon in the evening sky, will set at 7:27 p.m. and 7:28 p.m., respectively. It is possible to observe Venus before sunset with a small telescope, but the usual precautions apply.

As one moves south the situation for observing the planets improves. From Miami, Mercury and Venus still set only one minute apart (at 7:51 p.m. and 7:52 p.m., respectively), but the sun sets right before them at 7:27 p.m., when Venus and Mercury are only about 4 degrees above the western horizon. Venus is bright enough that a keen eye might catch it just before it sinks below the horizon.

At the equator, in Quito, Ecuador, for example, the two planets are 7 degrees above the horizon when the sun sets at 6:13 p.m. local time. Farther south in Cape Town, South Africa, the sun sets at 6:36 p.m. local time, while the Mercury and Venus set at 7:10 p.m. and 7:09 p.m., respectively on Sept. 13. Both are just under 7 degrees in altitude at sunset, so there's time to catch them as the sky darkens.

Jupiter and Saturn, meanwhile, are also at higher altitudes — from mid-northern latitudes they are under 30 degrees above the horizon at their highest, but in the Southern Hemisphere they are higher. In Cape Town, for example, Jupiter is at 77 degrees at sunset, while Saturn is at 65 degrees.

Besides being a marker for North American harvests, the full moon of September marks the Jewish holiday of Sukkoth, also called the Feast of Tabernacles. Observant Jews will construct a sukkah, a small structure with a roof of natural material, in order to spend time inside and commemorate the wandering in the wilderness after the escape from Egypt described in the Torah.

The Ojibwe, who live near the Great Lakes, referred to the ninth moon of the year as the Falling Leaves Moon. The Cree of Ontario called the September full moon the Rutting Moon because it was when many animals started mating (notably, deer). In the Pacific Northwest, the Haida called it the Cedar Bark Moon (Kíit'aas Kungáay), according to the Tlingit Moon and Tide Teaching Resource published by the University of Alaska in Fairbanks.

In China, the eighth lunar month (which, in 2019, is Aug. 23 to Sept. 3; it shifts year to year) is called Guìyuè, or Osmanthus Month, for when the eponymous flowers bloom, and the full moon occurs on the 15th day, halfway through. The day of the full moon in the eighth month is called Mid-Autumn Day and is an important festival in China, according to travelchinaguide.com.

In the Southern Hemisphere, September marks the beginning of springtime, with the days getting warmer and longer. The Māori of New Zealand called the lunar months of August and September "Mahuru," meaning "The Earth has now acquired warmth, as well as vegetation and trees," according to the Encyclopedia of New Zealand.