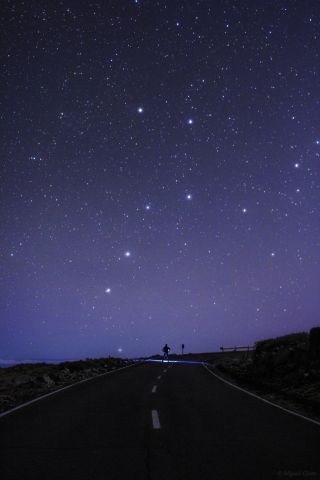 Miguel Claro recently sent Space.com this cool image of the constellation Ursa Major, or the Big Dipper, shining over the road to Roque de Los Muchachos on the island of La Palma in the Canary Islands, Spain. He used a Canon 60Da camera (ISO2500; 24mm at f/2; Exp. 15 seconds) to capture the image.
(Image: © Miguel Claro | www.miguelclaro.com)

The Big Dipper is an asterism in the constellation Ursa Major (the Great Bear). One of the most familiar star shapes in the northern sky, it is a useful navigation tool.

Asterisms are prominent groups of stars that form patterns but are smaller than, or even part of, a constellation. They are usually easy to find because the stars are close to one another and about the same brightness. In this case, the Big Dipper has eight stars in it. Seven are visible at a glance, while the eighth is a visible double star that is just detectable with the naked eye in an area with clear "seeing" and with good vision.

The stars making up the asterism are (from the end of the handle and around the bottom of the bowl) Alkaid, Mizar-Alcor, Alioth, Megrez, Phecda, Merak and Dubhe. Mizar and Alcor (which is noticeably dimmer) are the double forming the second star from the end of the Big Dipper's handle. (The system actually contains at least six stars, but only two of them are visible to the naked eye.) According to Rick Raasch of the Texas Astronomical Society, Mizar was the first double star to be discovered through a telescope, in 1662; the first star to be photographed, in 1857; and the first star to be identified as a spectroscopic binary, in 1889.

In 2017, the comet Comet 41P/Tuttle-Giacobini-Kresák made a pass through Ursa Major and Draco. The comet made its closest approach to Earth in at least 50 years, and possibly 100, NASA said in a statement at the time.

In 2015, the star 47 Ursae Majoris – which likely hosts three exoplanets – was renamed Chalawan in a contest hosted by the International Astronomical Union, as a part of its NameExoWorlds contest. Chalawan is a Thai name for crocodile, and it is the name by which Thai culture refers to the Big Dipper.

The Big Dipper was imaged from space by the Jupiter-bound Juno spacecraft in 2012 in what is likely the farthest photo of the constellation ever taken.

"I don't know if it's the first space-based image of the Big Dipper but, as it was taken when we were well beyond Mars orbit, it's probably from the farthest out," Scott Bolton, Juno principal investigator from the Southwest Research Institute in San Antonio, said in a statement.

A companion star to Alcor was discovered in 2009, when astronomers using adaptive optics on the 200-inch Hale Telescope at the Palomar Observatory saw an unfamiliar source of light next to the star. (Adaptive optics corrects the focus to adjust for changes in the atmosphere, allowing for a clearer picture.)

"Right away I spotted a faint point of light next to the star," said Neil Zimmerman, a graduate student who was then working on his Ph.D. with the American Museum of Natural History in New York, in a previous Space.com story. "No one had reported this object before, and it was very close to Alcor, so we realized it was probably an unknown companion star."

In the United Kingdom and Ireland, it is called the Plough. That idea may have arisen from an old Nordic constellation that was believed to represent a wagon or chariot belonging to the chief god, Odin, said Tom Kerss, an astronomer at the Royal Observatory Greenwich.

In Danish, the constellation was called "Karlsvogna," which means "Charles' wagon" in English. Some 19th-century texts refer to the Plough by that name, he said. In other cultures, the asterism is a ladle (China, Japan and Korea), a cleaver (northern England), a cart (Germany and Hungary), a saucepan (the Netherlands), a salmon net (Finland) and a coffin (Saudi Arabia).

The Big Dipper was an important part of the Underground Railroad during the Civil War. Slaves escaping from the South were told to "follow the Drinking Gourd" to the North, according to the website The Constellations and Their Stars.

"It's a useful navigation tool in the Northern Hemisphere," Kerss told Space.com.

The Big Dipper serves as a pointer to other locations in the sky. A common expression in astronomy is "follow the Arc to Arcturus." The "arc" refers to the handle of the Big Dipper. Amateur astronomers seeking the bright red star Arcturus that anchors the constellation Boötes can find it by using the arc of the Dipper's handle to glide their eyes across the sky.

Also, the two stars on the outer edge of the bowl — if you use them and project the line "up" relative to the bottom of the Dipper — will point to Polaris, the North Star.

Look high in the sky toward the northeast this time of year and you can't miss the Big Dipper. Making out the Big Bear (Ursa Major) could prove a little more challenging. This map shows them at around 8 p.m. from mid-northern latitudes this weekend.