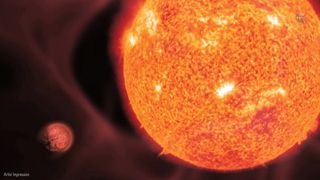 The star 55 Cancri and one of its planets, 55 Cancri e, are two celestial objects that have been given new names through a contest that allowed members of the public to suggest and vote on names for distant stars and alien planets.
(Image: © NASA)

The people have spoken: 14 distant stars and 31 alien planets are getting new names that have been selected and voted on by members of the public. And those exoplanet names include some wild ones like Poltergeist, Thestias and even Quijote.

Today (Dec. 15), the International Astronomical Union (IAU) announced the winners of its NameExoWorlds contest. Members of the public were free to vote on 274 proposed names submitted by various groups, including amateur astronomy clubs, schools, universities and planetariums from 45 countries, according to the IAU. In total, the contest drew in 573,242 votes from 182 countries.

The winning titles included the names of characters from ancient mythology, famous scientists, fictional characters, ancient cities and more. One star and three of its planets were all named after "undead" creatures from fiction and mythology: Lich, Draugr, Poltergeist and Phobetor. The star is a neutron star, which is actually the collapsed core of a star that has run out of fuel and "died," making it a kind of celestial zombie. [The Strangest Alien Planets Known to Science]

"The winning names are to be used freely in parallel with the existing scientific nomenclature, with due credit to the clubs or organizations that proposed them," according to the statement from the IAU, which is the world authority that determines the official names of celestial objects.

The original NameExoWorlds contest accepted submissions for 32 exoplanets and 15 stars. However, one of the winning entries was ultimately rejected by the committee that is responsible for validating the names, the IAU Executive Committee Working Group on the Public Naming of Planets and Planetary Satellites.

"After extensive deliberation, the Committee decided to annul the vote for one particular ExoWorld — tau Boötis — as the winning name was judged not to conform with the IAU rules for naming exoplanets," the statement said. The IAU did not clarify which proposed name won the popular vote, or why it was rejected.

The 14 newly named stars and 31 exoplanets are part of 20 alien solar systems. One star, 55 Cancri, was given the new name Copernicus, after the famous astronomer Nicolaus Copernicus. Five exoplanets that orbit Copernicus were also named after monumental astronomers: Galileo, Brahe, Lippershey, Janssen and Harriot.

A star that previously held the rather dry title of PSR 1257+12 is now named Lich, which is a type of "undead" being, like a zombie, that appears in fantasy fiction. The new name for PSR 1257+12 was chosen by the Planetarium Sudtirol Alto Adige, located in the Italian Alps in Val d'Ega.

The group wrote in its proposal that the name "lich" is appropriate because PSR 1257+12 is a type of neutron star called a pulsar — which means it is the condensed, leftover material from a star that ran out of fuel and "died."  Neutron stars are stellar corpses that "refuse to die," the group wrote. They still radiate light, even though the star's fusion engine has stopped, and they can therefore be considered "undead" or zombie stars. The lich, the group wrote, is "oftentimes depicted with a skeletal body," and "holds power over other undead creatures."

The group also gave new names to three of the planets orbiting Lich: Draugr, Poltergeist and Phobetor.  A draugr is an undead creature from Norse mythology. A poltergeist is a ghost that creates physical disturbances, such as strange noises and moving objects. The group felt this was an appropriate name because sometimes, planets around pulsars are detected because of how they disturb the light coming from the pulsar.

Phobetor is "one of the three dream gods in [Greek] mythology, the personification of nightmares," the group wrote. The group wrote that the name was fitting because, before the discovery of planets around pulsars, astronomers only predicted the existence of such planets "in their wildest dreams/nightmares. They did not expect planets to survive a violent supernova, or that they could form out of the supernova remnant. Since this planet experienced a rather nightmarish formation process […] Phobetor is a fitting name." [Supernova Photos: Great Images of Star Explosions]

Names from history and folklore

Another solar system family was named by the Pamplona Planetarium in Spain in honor of a monumental work of Spanish literature. The parent star (mu Arae) is now called Cervantes, after Miguel de Cervantes Saavedra, the Spanish writer who penned "The Ingenious Gentleman Don Quixote of La Mancha." Four of the parent star's planets are named after characters in the book: Quijote (the Spanish spelling of the lead character's name), Dulcinea (Quixote's true love), Rocinante (his horse) and Sancho (his squire).

A planet twice the size of Jupiter that orbits the star Pollux is now known as Thestias. In Greek mythology, Thestias is Pollux's grandfather, according to the citizen astronomy project based in Perth, Australia, known as theSkyNet, which submitted the name.

Another newly renamed star is 47 Ursae Majoris in the constellation Ursa Major, which is known in Western societies as the Great Bear and contains the Big Dipper. But in Thailand, the constellation is known as the Crocodile, according to the Thai Astronomical Society, which submitted the new name for the star: Chalawan.

"The Thai Astronomical Society thus proposes to name 47 Ursae Majoris as the legendary Chalawan, the great crocodile from a popular Thai folktale 'The Legend of Krai Thong,'" said the society's submission text, which is available on the IAU website. "Lord Chalawan was a large, powerful and aggressive crocodile made invulnerable by the magic of his crystal tooth. His lair was an underwater cave in the town of Phichit. The cave had an enchanted crystal that turned Lord Chalawan into a human when he was in the cave. Lord Chalawan abducted Taphao Thong and took her to his cave. He was later defeated by Krai Thong."