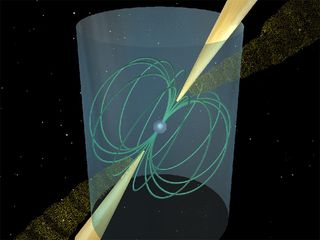 Schematic view of a spinning star called a pulsar, which beams out rays of light like a lighthouse. Pulsars provide the most precise natural cosmic clocks known to date.
(Image: © M. Kramer, MPIfR)

Rapidly spinning stars that pulse over time could be used asthe universes's most accurate clocks, thanks to a new discovery thathelps explain how they rotate.

Astronomers have long hoped to use these stars, calledpulsars, as time-keepers but slight irregularities in their spinning rates haveso far prevented those plans. But a new understanding could enable scientiststo compensate for it.

Pulsars are created when stars collapse and become so densethat protons and electrons squish together to becomeneutrons. After the star's mass is condensed into a small volume,conservation of angular momentum causes the pulsar to rotate extremely rapidly? up to hundreds of revolutions per second.

Pulsars emit a steady ray of light that sweeps around like alighthouse beam as they rotate ? thus, their light appears to pulse on and offas the beam crosses our line of sight.

This pulsing is almost perfectly steady ? but not quite.Slight variations in the observed puling rate have been unexplained, until now.

A team led by astronomer Andrew Lyne of the University ofManchester in the United Kingdom used data from Lovell telescope at theuniversity's Jodrell Bank Observatory to find that the deviations arise becausethe pulsarsare slowly spinning down, and they are doing so at two different rates. Thepulsars seem to switch between these spin-down rates abruptly andunpredictably.

Detailed measurements of a pulsar's light at any particulartime should indicate what its slowdown rate is, and allow astronomers tocalculate and apply a correction. That should greatly improve pulsars'usefulness as cosmic clocks.

Scientists hope that pulsar clocks can be applied to thequestion of gravitationalwaves. Einstein's theory of general relativity suggests that powerfulevents such as the merging of two supermassive black holes will create ripplesin space-time that spread out through the universe.

These waves have never before been detected, but pulsars maybe the key to finding them.

For example, if a gravitational wave passed through apulsar, it would cause the pulsing rate to change. If these changes could bemeasured very accurately, scientists may be able to prove the existence ofgravitational waves.

"Many observatories around the world are attempting touse pulsars in order to detect the gravitationalwaves that are expected to be created by supermassive binary black holes inthe universe," said co-researcher Ingrid Stairs of the University ofBritish Columbia. "With our new technique we may be able to reveal thegravitational wave signals that are currently hidden because of the irregularitiesin the pulsar rotation."

The researchers detailed their findings in a paper publishedonline June 24 in the journal Science.