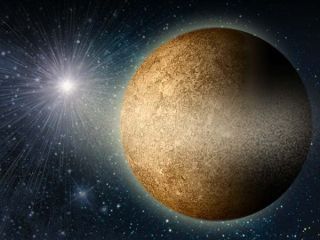 An artist's impression of the "super Earth" orbiting a Sun-like star. Scientists say the planet is probably rocky, rather than being made of ice and gas, and it likely has a thin atmosphere. But they can't say anything else about its appearance or composition. Image © SPACE.com.
(Image: © Elizabeth Lagana)

In a discovery that has left one expert stunned, European astronomers have found one of the smallest planets known outside our solar system, a world about 14 times the mass of our own around a star much like the Sun.

It could be a rocky planet with a thin atmosphere, a sort of "super Earth," the researchers said today.

But this is no typical Earth. It completes its tight orbit in less than 10 days, compared to the 365 required for our year. Its daytime face would be scorched.

The planet's surface conditions aren't known, said Portuguese researcher Nuno Santos, who led the discovery. "However, we can expect it to be quite hot, given the proximity to the star."

Still, the discovery is a significant advance in technology: No planet so small has ever been detected around a normal star. And the finding reveals a solar system more similar to our own than anything found so far.

The star is like our Sun and just 50 light-years away. A light-year is the distance light travels in a year, about 6 trillion miles (10 trillion kilometers). Most of the known extrasolar planets are hundreds or thousands of light-years distant.

The star, mu Arae, is visible under dark skies from the Southern Hemisphere. It harbors two other planets. One is Jupiter-sized and takes 650 days to make its annual trip around the star. The other planet, whose existence was confirmed with the help of the new observations, is farther out.

The three-planet setup, with one being rocky, is unique.

"It's much closer to our solar system than anything we've found so far," said Alan Boss, a planet-formation theorist at the Carnegie Institution in Washington.

"This really is an exciting discovery," said Boss, who was not involved in the work. "I'm still somewhat stunned they have such good data."

Most of the more than 120 planets found beyond our solar system are gaseous worlds as big or larger than Jupiter, mostly in tight orbits that would not permit a rocky planet to survive.

A handful of planets smaller than Saturn have been found, but none anywhere near as small as the one announced today. And a trio of roughly Earth-sized planets was found in 2002 to orbit a dense stellar corpse known as a neutron star. They are oddballs, however, circling rapidly around a dark star that would not support life. Some planet hunters don't consider these three to be as important as planets around normal stars.

At 14 times the mass of Earth, the newfound planet -- circling a star similar in size and brightness to our Sun -- is about as heavy as Uranus, a world of gas and ice and the smallest giant planet in our solar system. Theorists say 14 Earth-masses is roughly the upper limit for a planet to possibly remain rocky, however. And because this planet is so close to its host star, it likely had a much different formation history than Uranus.

In our solar system, the four innermost planets are all rocky.

The leading theory of planet formation has the gas giants forming from a rocky core, a process in which the core develops over time, then reaches a tipping point when gravity can rapidly collect a huge envelope of gas. This theory suggests the newfound planet never reached that critical mass, said Santos, of the Centro de Astronomia e Astrofisica da Universidade de Lisboa, Portugal.

"Otherwise the planet would have become much more massive," Santos said via e-mail.

"This object is therefore likely to be a planet with a rocky core surrounded by a small gaseous envelope and would therefore qualify as a super-Earth," the European team said in a statement.

In a telephone interview, Boss of the Carnegie Institution said the European's analysis of the data represents a "reasonable argument." He said the planet had to form inside the orbit of the larger planet in the system, which orbits the star about twice as far as Earth is from the Sun. Boss also points out that Earth is about 18 times as massive as Mercury, so even in our solar system there is a range of possibilities for rocky planets.

Finally, Boss said, the star mu Arae has a higher metal content than the Sun, and theory says a planet forming close to such a star can be expected to gather more mass. It's all about how much building material is available, he said.

There are no conventional pictures of the object, as it was detected by noting its gravitational effect on the star. The search project leading to the discovery is led by Michel Mayor of the Geneva Observatory in Switzerland.

While researchers do not know the full range of conditions under which life can survive, the newly discovered world, with its hot surface, is not the sort of place biologists would expect to find life as we know it.

Santos said life on the large world is not likely. But, he added, "one never knows."