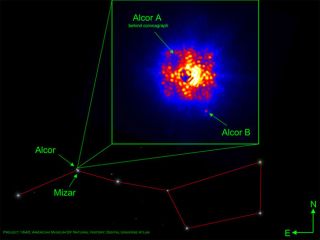 Alcor, a star in the middle of the Big Dipper's handle, has a newly found red dwarf companion (circled in green). Project 1640 astronomers discovered the faint star by blocking out almost all of Alcor's light with a coronagraph. The halo of speckles around the coronagraph's occulting mask is caused by the wave-like properties of light from Alcor's residual glare. The actual diameters of both stars take up just a tiny fraction of a pixel.
(Image: © Project 1640/AMNH and Digital Universe Atlas)

The Big Dipper has a new star.

One of the stars that makes the bend in the ladle's handle,Alcor, has a smaller red dwarf companion, new observations have revealed.

Alcor is a relatively young star twice the mass of the Sun. Stars this massive are relatively rare (less than a few percent of all stars), short-lived, and bright.

Alcor and its cousins in the Big Dipper formed from the same cloud of matter about 500 million years ago, something unusual for a constellation since most of these patterns in the sky are composed of unrelated stars.

Alcor looks to be in the same position in the Big Dipper with another star, Mizar from the perspective of a viewer on Earth. In fact, both stars were used as a common test of eyesight — being able to distinguish "the rider from the horse" (as the two stars are unofficially known) — for ancient Arab, Roman and English warriors. (Mizar is the brighter of the two stars and can still be seen with the naked eye, while Alcor, a little fainter, would take relatively dark skies to see.)

One of Galileo's colleagues observed that Mizar itself is actually a double, the first binary star system resolved by a telescope. Many years later, the two components Mizar A and B were themselves determined each to be tightly orbiting binaries, altogether forming a quadruple system.

Now, Alcor, which is about 3 light-years away from the four stars of the Mizar system, also has a companion.

In March, a group of astronomers attached a coronograph and adaptive optics to the 200-inch Hale Telescope at the Palomar Observatory in California and pointed it to Alcor. (Adaptive optics counteract interference from Earth's atmosphere by making swift, real-time changes in the shape of a telescope's mirror during observations.)

"Right away I spotted a faint point of light next to the star," said Neil Zimmerman, a graduate student who is working on his Ph.D. with the American Museum of Natural History in New York. "No one had reported this object before, and it was very close to Alcor, so we realized it was probably an unknown companion star."

A few months later, the team looked at the star again, hoping to prove that the two stars were companions by mapping the tiny movement of both in relation to very distant background stars as the Earth moves around the Sun, or parallactic motion. If the proposed companion were just a background star, it wouldn't move along with Alcor.

"We went back 103 days later and found the companion had the same motion as Alcor," said Ben R. Oppenheimer, Curator and Professor in the Department of Astrophysics at AMNH.

Alcor and its newly found, smaller companion, Alcor B, are both about 80 light-years away from Earth and orbit each other every 90 years or more.

The team was also able to determine the color, brightness and even rough composition of Alcor B because the novel method of observation they use records images at many different colors simultaneously. The team determined that Alcor B is a common type of M-dwarf star or red dwarf that is about 250 times the mass of Jupiter, or roughly a quarter of the mass of our Sun. The companion is much smaller and cooler than Alcor A.

"Red dwarfs are not commonly reported around the brighter higher mass type of star that Alcor is, but we have a hunch that they are actually fairly common," Oppenheimer said. "This discovery shows that even the brightest and most familiar stars in the sky hold secrets we have yet to reveal."

The new observations are detailed in the Astrophysical Journal.

Oppenheimer and his team hope to use the same technique of looking for parallactic motion in the search for exoplanets.

"We hope to use the same technique to check that other objects we find like exoplanets are truly bound their host stars," Zimmerman said. "In fact, we anticipate other research groups hunting for exoplanets will also use this technique to speed up the discovery process."