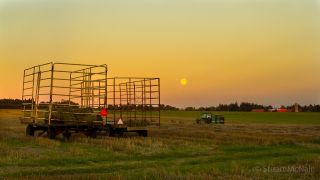 In this photo by Stuart McNair, the rising Harvest Moon illuminates farmland during sunset on Sept. 15, 2016 north of Toronto, Canada.
(Image: © Stuart McNair)

Next Thursday's full moon is somewhat special: It will also carry the title of "Harvest Moon" for those living in the Northern Hemisphere.

But this full moon is also the one that comes closest on the calendar to the September equinox. In 2017, this circumstance occurs later than usual; it's in October, as opposed to the more traditional month of September. [Harvest Moon 2017: When and How to See October's Full Moon]

Full moon names date back to Native Americans living in what is now the northern and eastern United States. Those tribes kept track of the seasons by giving distinctive names to each recurring full moon, and those names were applied to the entire month in which the full moon occurred. At the peak of the harvest, farmers can work into the night by the light of the Harvest Moon, hence the name. Corn, pumpkins, squash, beans and wild rice — the chief Native American staples — become ready for gathering at this time.

Not a "long night's moon"

Many people think that the Harvest Moon remains in the night sky longer than any of the other full moons, but that's not so. In fact, the full moon occurring nearest to the winter solstice is the one that stays above the horizon the longest; at midnorthern latitudes, it remains aloft in excess of 15 hours. What sets the Harvest Moon apart from the others is that it rises at about the same time the sun sets. More importantly, at this time of year, instead of rising its normal average of 50 minutes later each evening, the moon seems to rise at roughly the same time each night.

The reason for that variation is that the moon appears to move along the ecliptic, and at this time of year, the ecliptic makes its smallest angle with respect to the horizon for those living in the Northern Hemisphere. [2017 Full Moon Calendar]

In contrast, for those living in the Southern Hemisphere, the ecliptic at this time of year appears to stand almost perpendicular (at nearly a right angle) to the eastern horizon. As such, the difference for the time of moonrise exceeds the average of 50 minutes per night. At Auckland, New Zealand (43.5 degrees south), for instance, the night-to-night difference amounts to 71 minutes.

Interestingly, for those who live near 70 degrees north latitude, the moon does indeed rise at the same time each night around the time of the Harvest Moon. And for those who live even farther to the north, there's a paradox: The moon rises earlier! At Barrow, Alaska (latitude 71.3-degrees north), for instance, the times of moonrise on Oct. 4, 5 and 6 will be 8:10 p.m., 8:04 p.m. and 7:57 p.m., respectively,

So, from Barrow, the moon will rise about 7 minutes earlier each night.