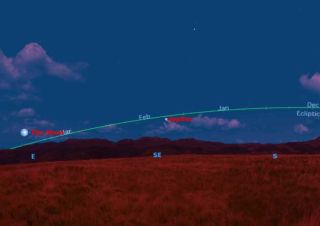 Just as the sun is setting in the west this weekend, look to the east and see the harvest moon and Jupiter rising.
(Image: © Starry Night Software)

This weekend's full moon will be a somewhat special one in

The moon officially turns full when it reaches that spot in

Not a few people are under the impression that the harvest

In actuality, the night-to-night difference is greatest for

The reason for this seasonal circumstance is that the moon

In contrast, for those living in the Southern Hemisphere, the ecliptic at this time of year appears to

Interestingly, for those who live near 60-degrees north latitude, the

Joe Rao serves as an