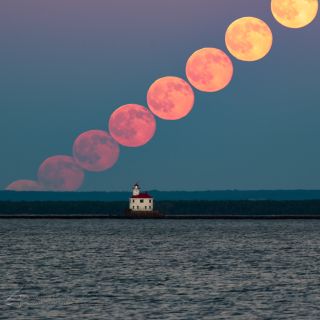 A series of shots of the full moon on June 20, 2016, taken from Duluth, Minnesota's Park Point beach. The Superior Entry Lighthouse can be seen in the foreground. The photo was sent in by photographer Grant Johnson.
(Image: © Grant Johnson)

Full moon names date back to a few hundred years ago when Native Americans lived in what is now the northern and eastern United States. Those tribes kept track of the seasons by giving distinctive names to the full moon of every month.

Some variations arose in the names that were assigned to full moons in some months, but generally, the Algonquin tribes, from the New England area in the east to Lake Superior farther west, used the same names. European settlers also created some of their own names for full moons throughout the year.

Since the lunar ("synodic") month is roughly 29.5 days in length, on average, the dates of the full moon shift from year to year. Here is a list of all of the full moon names, dates and times (for the Eastern time zone) in 2017. [Watch: The Full Moon - Why It Happens and What It Means]

Jan. 12, 6:34 a.m. EST – Full Wolf Moon. Amid the cold temperatures and deep snows of midwinter, the wolf packs howled hungrily outside Native American villages. The Full Wolf Moon is also known as the Old Moon and the Moon after Yule. In some tribes, it was called the Full Snow Moon, though most applied that name to the next full moon.

Feb. 10, 7:33 p.m. EST – Full Snow Moon. Usually, the heaviest snows fall during this month. Hunting becomes very difficult, so some tribes dubbed February's full moon the Full Hunger Moon. There will also be a penumbral lunar eclipse on this evening. The moon will pass through the Earth's penumbra — the planet's outer shadow. Greatest eclipse occurs at 7:43 p.m. EST when 98.8 percent of the moon's diameter is immersed in the penumbra. Even a casual observer can see that the moon's upper portion appears noticeably shaded or smudged. For about a half hour before or after this time, viewers should be able to discern this slight dimming effect.

March 12, 10:54 p.m. EDT – Full Worm Moon. In March, the ground softens and earthworms emerge, inviting the return of the robins. The northern tribes called this month's full moon the Full Crow Moon — since the cawing of crows signals the end of winter — or the Full Crust Moon because the snow cover becomes crusted from thawing by day and freezing at night. TheFull Sap Moon, marking the time of tapping maple trees, is another name for this moon.

April 11, 2:08 a.m. EDT – Full Pink Moon. The grass pink orchid, or wild ground phlox, is one of the earliest and most ubiquitous flowers of spring. Other names were the Full Sprouting Grass Moon, the Egg Moon and — among coastal tribes — the Full Fish Moon when the shad come upstream to spawn. In 2017, this is also the Paschal Full Moon; the first full moon of the spring season. The first Sunday following the Paschal Moon is Easter Sunday, which indeed will be observed five days later on Sunday, April 16.

May 10, 5:42 p.m. EDT – Full Flower Moon. Flowers are now abundant just about everywhere in the northern hemisphere. The full moon of May is also known as the Full Corn Planting Moon or the Milk Moon.

June 9, 9:10 a.m. EDT – Full Strawberry Moon. Strawberry picking season peaks during this month. Europeans called this the Rose Moon. Since the moon arrives at apogee about 15 hours earlier, this will also be the smallest full moon of 2017. In terms of apparent size, it will appear 12.2 percent smaller than the full moon of Dec. 3.

July 9, 12:07 a.m. EDT – Full Buck Moon. This moon appears during the time when the new antlers of buck deer push out from their foreheads in coatings of velvety fur. It was also often called the Full Thunder Moon since thunderstorms are most frequent during this time. Sometimes it's also called the Full Hay Moon.

Aug. 7, 2:11 p.m. EDT – Full Sturgeon Moon. This is when this large fish of the Great Lakes and other major bodies of water like Lake Champlain is most readily caught. A few tribes knew it as the Full Red Moon — because when the moon rises, it looks reddish through sultry haze — or the Green Corn Moon or Grain Moon.The moon will also undergo a partial lunar eclipse. About one-quarter of the moon's lower limb will be immersed in the Earth's dark umbral shadow at 18:20 universal time. This eclipse favors the Eastern Hemisphere; much of the Western Hemisphere will be shut out of seeing this eclipse since it will occur during the daylight hours when the moon is below the horizon.

Sept. 6, 3:03 a.m. EDT – Full Corn Moon.This moon is also sometimes called the Barley Moon, in those years when the September full moon comes during the opening days of the month — an artifice that was used to keep the Harvest Moon from coming too early. [The Moon's Phases Explained (Infographic)]

Oct. 5, 2:40 p.m. EDT– Full Harvest Moon. Traditionally, this designation goes to the September full moon that occurs closest to the autumnal (fall) equinox. This year's Harvest Moon comes unusually late. At the peak of the harvest, farmers can work into the night by the light of this moon. Usually, the moon rises an average of 50 minutes later each night, but for the few nights around the Harvest Moon, the moon seems to rise at nearly the same time each night: just 25 to 30 minutes later across the U.S., and only 10 to 20 minutes later for much of Canada and Europe. Corn, pumpkins, squash, beans and wild rice — the chief staples of Native Americans — are now ready for gathering. [How To Mix A Harvest Moon - A Full Moon Cocktail! (Video)]

Nov. 4, 1:23 a.m. EST – Full Beaver Moon. This was the time of year when the old Native American tribes set beaver traps, to ensure a supply of warm winter furs before the swamps froze. Another interpretation suggests that the name Beaver Full Moon comes from the fact that the beavers are now active in their preparation for winter. It's also called the Frosty Moon.

Dec. 3, 10:47 a.m. EST – Full Cold Moon. On occasion, this moon was also called the Moon before Yule. December is also the month in which the winter cold fastens its grip. Sometimes this moon is referred to as the Full Long Nights Moon — a fitting name, since nights are longer at this time of year, and the moon appears above the horizon for a long time. This particular full moon makes its highest arc across the sky on this day because that's when it appears diametrically opposite to the low sun. The moon will also arrive at perigee about 17 hours later, at 4:00 a.m. EST on Dec. 4, at a distance of 222,135 miles (357,492 kilometers) from Earth. This will be the biggest full moon of 2017 and the only "supermoon" of the year. Very high ocean tides can be expected during the next two or three days, thanks to the coincidence of perigee with full moon.

Editor's note: If you capture an amazing full moon photo that you'd like to share with us and our news partners for a story or gallery, send images and comments to managing editor Tariq Malik at spacephotos@space.com.

Joe Rao serves as an instructor and guest lecturer at New York's Hayden Planetarium. He writes about astronomy for Natural History magazine, the Farmer's Almanac and other publications, and he is also an on-camera meteorologist for Verizon FIOS 1 News in Rye Brook, NY. Follow us @Spacedotcom, Facebook or Google+. Originally published on Space.com.