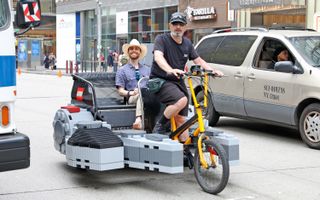 NEW YORK — Lego had a special surprise for "Star Wars" fans in New York City in celebration of Star Wars Day, or "May the Fourth," as fans call it: The company built a 20,300-brick Millennium Falcon pedicab that offered free rides around Manhattan's Bryant Park.

By the time Space.com arrived at the scene 20 minutes before the Millennium Falcon was scheduled to take to the streets, around a dozen people had already arrived to admire the Lego starship. Enthusiastic passersby stopped to snap photos as co-pilot Chewbacca greeted fans beside the starship.

Star Wars Day celebrations started in Toronto on May 4, 2011, and have been happening ever since. "We wanted something fun to do around May the Fourth," Ashley Edwards, who handled public outreach for the event, told Space.com. A pedicab is fun, maneuverable and easy to ride, she added. ['Star Wars' Spaceships: Our Favorite Vehicles in a Galaxy Far, Far Away]

Lego builders constructed the ship from a model they had designed specifically for this purpose, Edwards said as she took the prototype out of her purse. Unfortunately, this miniature Millennium Falcon pedicab won't be appearing in a store near you.

We grabbed a photo with Chewie, who towered over every non-Wookie in attendance. Then, we boarded the Falcon, and the engine roared to life. Mind you, that engine was professional pedicab driver and "Star Wars" fan Lee Buckman. He always aims for his best, but Buckman had extra enthusiasm today, shouting, "Come on, it's 'Star Wars'! And there's Chewbacca!"

We took off from spaceport Bryant Park and cruised toward 42nd Street, with pilot Buckman offering colorful commentary from the cockpit. Space.com brought along a Lego Luke Skywalker minifigure and his X-wing starfighter to escort the Falcon.

The Millennium Falcon circled the New York Public Library, sparking smiles and turning heads all along the way. New York traffic kept us from jumping to hyperspace, but we still managed to make the run in less than 12 parsecs — actually, more like 346 pico-parsecs, which is roughly 3,500 feet (1,067 meters).

Chewbacca had gone on break by the time we returned, but it's hard to blame the furry Wookie; temperatures were predicted to reach 85 degrees Fahrenheit in the city on Friday. And while lines had yet to form for rides on the Corellian freighter early that morning, Lego expected crowds would appear as the day wore on.