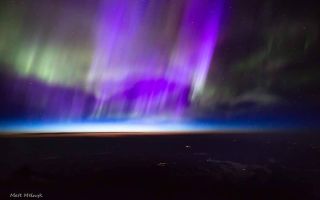 Pilot Matt Melnyk captured images of an electric-blue aurora in the sky April 20 while flying over Canada.
(Image: © Matt Melnyk)

The space-weather news site Spaceweather.com reported that an "interplanetary shock wave" hit Earth's magnetic field at about 3:50 a.m. EDT (2350 on April 19 GMT), quadrupling the intensity of the flow of particles streaming from the sun toward Earth, called the solar wind. The incoming wave of material resulted in a G2-level, or moderate, geomagnetic storm, according to the National Oceanic and Atmospheric Administration's Space Weather Prediction Center (SWPC). These types of storms can cause power grid fluctuations and have some impact on radio communications. [See Spectacular Photos of Auroras from Space]

And they also cause enhanced auroras. This storm led to auroras possibly reaching through Canada and as far south as New York, Wisconsin and Washington state in the U.S., the SWPC said.

Spaceweather.com reported that auroras stretched as far south as six northern U.S. states in the Northern Hemisphere, and could also be seen in the Southern Hemisphere over Tasmania. (Auroras form near both the North and South Poles, although the northern ones are more well-known.)

Pilot Matt Melnyk caught a view of electric-blue auroras streaking through the sky from 39,000 feet (12,000 meters) while flying over Canada.

He told Spaceweather.com, "I've been flying airplanes for 20 years and photographing aurora[s] for 10 years, but I've never seen anything like this before."

"Electric blue auroras!" he continued. "This was while on a red eye flight from Edmonton [Alberta] to Toronto around 4 am over northern Manitoba. Unbelievable sky. I was able to grab some hasty shots with a cell phone."

Auroras form as Earth's magnetic field guides charged particles released from the sun toward the planet's poles. They hit particles in Earth's upper atmosphere to produce bursts of light.

While green and yellow (and sometimes red) elements in auroras result when the charged particles excite the atmosphere's oxygen molecules, blue auroras can form when the particles from the sun hit charged nitrogen. The more particles there are streaming toward Earth, the more likely it is that brighter, more colorful auroras will form in the sky.

Philip Granrud photographed an intense aurora near his house, he told Spaceweather.com. "The auroras were so bright, they could be seen inside the city of Kalispell, Montana," he said. "We could see auroras for most of the night [even through the glare of our urban lights]," he said.

Often, geomagnetic storms are caused by solar flares or coronal mass ejections (CMEs), when the sun releases large bursts of radiation or charged particles. In this case, NASA researcher Yari Coloado-Vega told Space.com by email that the storm was caused by a high-speed stream of particles flowing out of a hole in the sun's outer atmosphere, called the corona. Such holes are more common during the sun's less active phases.

Editor's note: If you caught a great aurora photo that you'd like to share for a possible story or image gallery, send photos, comments and your name and observing location to spacephotos@space.com.