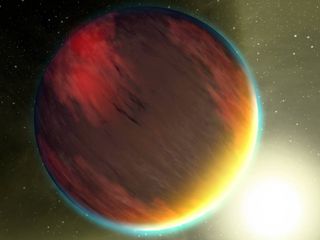 A group of astronomers is using a new method to search for hard to spot alien planets: By measuring the difference between the amount of light coming from the planets' daysides and nightsides, astronomers have spotted 60 new worlds thus far.

The researchers used data from NASA's Kepler space telescope to apply their technique. After training computers to hunt for the worlds, the researchers released the machines on over 140,000 stars. For their first dive into the data, the scientists targeted only stars with no known planets (although some of the systems are suspected to host planets). The computer program looked for changes in the amount of light coming from the star system that could be caused by the telescope alternately seeing a close-orbiting planet's dayside and then its nightside.

"We're searching for the light that the planets reflect from their host stars," Sarah Millholland, a graduate student at Yale University and a co-author of the paper, told Space.com by email. She and her co-author Greg Laughlin, a professor of astronomy at Yale, are using their program to identify exoplanets that otherwise would have been missed in the Kepler data. [7 Ways to Discover Alien Planets]

Normally, Kepler detects exoplanets via the transit method. As a planet passes between its star and the sun, the amount of light Kepler observes drops sharply because it has been blocked by the distant world, and rises again once the planet moves on. The researchers' new method also examines how starlight is changed by a passing planet, but in a whole new way.

"This [new] method of planet hunting uses the same kind of data as transits … but it involves looking for a different kind of signal in the data," Millholland said.

Traditionally, scientists have relied on a handful of methods to hunt for planets. One technique, called the radial velocity (RV) method, was the first to reveal a distant world, tracking how a massive planet can cause its parent star to wobble. And using another technique, called the direct imaging method, researchers snap photos of exoplanets, but that method can be applied only to large worlds orbiting far from their stars.

But thanks to the Kepler space telescope, the transit method rules the exoplanet roost. Over the course of its primary mission, which lasted about four years, Kepler revealed thousands of potential and confirmed worlds. (The Kepler spacecraft is now being used for a secondary mission, dubbed K2.) The spacecraft has a numbers advantage: Whereas instruments capable of searching for planets via the direct imaging and RV methods can focus on only one star at a time, Kepler can collect light from thousands of stars simultaneously.

But the transit method of searching for exoplanets also has limitations. For a planet to block the light of its star, it must orbit along the line of sight between Earth and the parent star. For every planet Kepler has spotted, there are likely another 99 that it couldn't see, according to an estimate by astronomy blogger and astrophysicist Ethan Siegel. That's an awful lot of missed worlds.

Millholland and Laughlin weren't content to leave all of those planets hidden. They used the Kepler data to look for worlds lit up by their parent stars, just like the sun lights up the face of the moon and the planets in our solar system (which is why planets in our solar system look like "stars" in the night sky). When an alien planet is on the near side of its star, it radiates a dim light from its nightside (from retained heat), and when the exoplanet is on the far side of the star, it reflects light from its parent star (the dayside). If those variations appear in the Kepler data, they can reveal a planet's presence.

After ensuring that the program could identify already-known, hot gas giants by their glow, the researchers turned their program loose on over 140,000 Kepler stars. The new technique turned up 60 previously unidentified gas giant candidates that don't transit their sun.

Due to limitations in its precision, Kepler can hunt only for the glow of close-in gas giant planets — the so-called hot Jupiters. Future instruments with increased precision could extend the method to smaller worlds, Millholland said.

Compared to the dazzling searchlight glow of a star, the glow from a planet is extremely faint. Stellar activity, such as sunspots and flares, have the potential to give false positives in the search for planets. That's why, Millholland said, any detections made with the new method should be followed up with RV-method measurements; they have not yet used RV to follow up on the 60 detections reported in the new study.

"RV observations are necessary to confirm the planet candidates," she said. (Many "objects of interest" detected by Kepler are also confirmed using RV measurements.) "Close-in giants produce large RV signals, so they should be readily detectable," Millholland said.

Millholland and Laughlin started out with stars with no known or suspected planets, but eventually, they plan to use the method to search for gas giants in systems already known to host small worlds.

This method could help solve the mystery of how and where hot Jupiters form, according to the authors.

Prior to the first discoveries of planets around other stars, planetary evolution models — which were based on Earth's solar system — set the birth of gas giants far from their stars, similar to where Jupiter and the other giant planets orbit the sun. So when the first exoplanet hunts revealed hot Jupiters, scientists were startled. The leading hypothesis became that these massive gassy worlds had migrated inward after forming at a distance.

But several years ago, some scientists proposed that hot Jupiters might have formed closer to their star. Laughlin is among those who question the migration model. Following another line of research, Laughlin predicted that hot Jupiters born near their stars would have small-mass sibling planets with orbits that are not aligned with the parent star's orbital plane. (In Earth's solar system, the eight planets orbit in a kind of flat disk around the sun.) Soon, he and Millholland plan to turn their attention toward known collections of rocky worlds with strange orbital alignments, in hunt of hidden gas giants.

"If we use this technique to find systems with hot Jupiters and misaligned small planets, it would be evidence toward this theory of hot-Jupiter formation," Millholland said. In the near future, the pair plans to use the method to probe stars that host oddly aligned rocky planets, after the 60 new worlds have been confirmed using the radial-velocity method.

"It would be best to study those systems separately," she said.