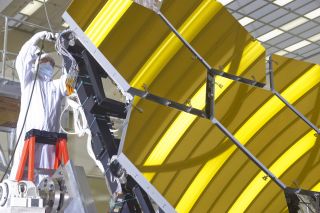 With NASA's James Webb Space Telescope set to launch in late 2018, researchers are already talking about the next generation of telescopes. That's because massive instruments take years, if not decades, to plan, build and launch, and scientists don't want the science to stop when Webb wraps up its mission.

When it comes to telescopes, larger mirrors collect more light, allowing researchers to see even fainter objects. Many are looking forward to a primary mirror far larger than JWST's 6.5-meter diameter, which is already the largest to ever be launched into space.

"When we find Earth 2.0, it will be fainter than the faintest galaxy in the Hubble Deep Field," said John Grunsfeld, physicist and former NASA chief scientist. As an astronaut, Grunsfeld served on multiple missions to service NASA's Hubble Space Telescope; in fact, he was the last human to touch the iconic instrument. [The Strangest Alien Planets (Gallery)]

At the Astrobiology Science Conference (AbSciCon) in Mesa, Arizona, in April, Grunsfeld made the case for a 12-meter telescope. Such an instrument could not only help spot the first truly Earth-like planet, but could also probe the origins of the universe, study worlds in the solar system and examine distant stars.

"We don't want to be in the position of saying, now we need a bigger telescope to find something important," Grunsfeld said.

One of the strongest contenders in the fight to follow JWST is the Large UV/Optical/Infrared Survey (LUVOIR). LUVOIR is a proposed multi-wavelength observatory with the ability to characterize exoplanets, study galaxy formation and evolution, and examine the early universe. With a primary mirror of 30 to 45 feet (9 to 14 meters), LUVOIR can reach the size Grunsfeld is calling for.

"It's truly a grand sort of vision," Debra Fischer, LUVOIR's Science and Technology Definition Team co-chair, said at the conference. She called the proposed instrument "the space observatory for the 21st century."

The name LUVOIR is pronounced as in French, or, Fischer said, "like a pirate," emphasizing the "ARRR."

As currently proposed, LUVOIR could probe star-forming regions of distant galaxies and map the distribution of dark matter in the nearby universe. It would be capable of identifying the first starlight in the early universe and image the icy plumes spouting from Saturn's icy moon Enceladus and Jupiter's giant moon Europa. The Earth-orbiting instrument should resolve features as small as 125 miles (200 km) on Pluto and other Kuiper Belt objects.

For attendees of the AbSciCon, exoplanets are where LUVOIR should really shine. The instrument should allow astronomers to analyze the atmospheres of Earth-like worlds around sun-like stars, hunting for signs of life. The closest contender to date, Kepler-452b, is a rocky planet orbiting a star like our own, but it's about 60 percent larger than Earth. Astronomers are hunting for a world closer to our planet's size, one whose atmosphere they can examine.

"The biosignatures are really what we're after," Fischer said.

Based on scientists' current understanding of how frequent rocky terrestrial worlds are around other stars, Fischer said that a large telescope like LUVOIR, combined with a coronagraph to block the light from the star, should be an enormous improvement over smaller telescopes. Over average observations, a 4-meter telescope should be capable of spotting something like six Earth-candidates, she said, while an 8-meter instrument could spot only around 25. A 16-meter instrument with a coronagraph should reveal around 100 worlds.

That's important, because most likely not every Earth-size world will be ripe for life. The more worlds an instrument can spot, the greater the likelihood that scientists can identify at least one of them as habitable.

"If the frequency of habitable worlds is something like 10 percent, then we like to have about 30 candidates to guarantee seeing one with high confidence," Fischer said. [10 Exoplanets That Could Host Alien Life]

Time is another factor. According to Grunsfeld, an hour hunting for exoplanets on a 16-meter telescope would produce the same results as about 10 hours on a 4-meter instrument. That means a larger instrument can identify more exoplanets over the same mission time.

"We can cover a lot more exoplanets to make that discovery [of Earth 2.0]," Grunsfeld said.

Thanks to the constant evolution of science, both Grunsfeld and Fischer emphasized that the work a future telescope may be involved with could easily be something unimagined today. The Hubble Space Telescope is an excellent example. When the instrument was launched in 1990, scientists had not yet identified a single exoplanet. Today, the telescope probes the atmospheres of worlds around other stars, an avenue unforeseen by its designers. LUVOIR will likely function the same way.

"It will answer questions we haven't even thought to ask," Fischer said.

For 27 years, the Hubble Space Telescope has probed the depths of the universe from its orbit around Earth. After initial problems with its instruments, astronauts were able to make repairs because the telescope was designed to be serviceable. Instruments could also be upgraded as necessary, allowing greater flexibility.

"I think serviceability is a critical role," Grunsfeld said. "Serviceability allows you to put new instruments in that keeps [the telescope] vital."

In 2010, Congress passed a law requiring that proposed flagship astrophysics support servicing, a law that JWST's successor will fall under. (JWST itself will not be serviceable.)

LUVOIR isn't a sure thing. It may wind up competing with another proposed mission, the Habitable Exoplanet Imaging Mission (HabEx). HabEx would focus on directly imaging planetary systems around sun-like stars, with a primary goal of directly imaging Earth-like planets and characterizing their atmospheres.

HabEx would use direct imaging, allowing it to capture an image of a far-off world. But the telescope won't be limited to exoplanet research. It will also be able to study features of the Milky Way and outside the galaxy.

Correction: An earlier version of this article stated that LUVOIR would not use direct imaging to hunt for exoplanets; it would use both direct imaging and spectroscopy.