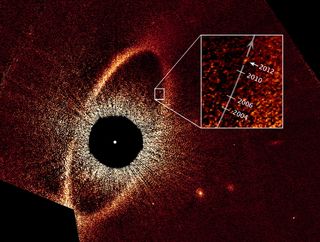 This false-color composite image traces the motion of the planet Fomalhaut b, a world captured by direct imaging.
(Image: © NASA, ESA, and P. Kalas (University of California, Berkeley and SETI Institute))

The hunt for planets around other stars is gaining speed. NASA's Kepler Space Telescope revealed more than 4,600 planetary candidates over its brief lifetime. But what does the future hold for exoplanets? When almost 350 exoplanet scientists gathered in Hawaii earlier this month, Space.com asked several of them what they were most looking forward to. Many expressed enthusiasm over the progress made in the field of direct imaging.

"The new technique now is direct imaging," Sara Seager, a professor of planetary science and physics at the Massachusetts Institute of Technology, told Space.com.

"It's really like the start of a brand-new era of exoplanets." [10 Exoplanets That Could Host Alien Life]

At its heart, the direct-imagingmethod resembles photography, whether via visible or infrared light. But photographing a planet isn't easy, especially when it is literally outshone by its parent star. Scientists must use an instrument known as a coronagraph to block the light from the star, revealing the dimmer light reflected by a planet in its shadow.

"It's not just that you know that [the planets] are there, it's that you can see it with your own eyes," Thayne Currie, a research associate at Subaru Telescope, told Space.com. Other methods of planet detection are indirect, meaning they find evidence of the planet's presence, but often do not see the light it emits.

"To me, [direct detection] means something fundamentally more special."

Although scientists have been taking pictures of stars since the early days of photography, the first directly imaged planet wasn't discovered until 2004. That  planet was orbiting  a brown dwarf, an object sometimes known as a "failed star" because it never gets massive enough to begin fusing material in its core. As a result, brown dwarfs are far dimmer than stars like the sun. In 2008, scientists announced the discovery of Fomalhault b, a planet directly imaged in visible light and orbiting a full-grown star. The same day, a separate team announced the successful image of the star HD 8799 in the infrared — but instead of one world, this star boasts four.

Since then, direct imaging has been growing by leaps and bounds, according to the scientists we spoke to.

According to Currie, one of biggest benefits of direct imaging is the amount of information that can be revealed with the method.

"It's not just stamp collecting. We're able to study these objects in exceptional detail," he said. "We actually know more about these planets than we knew about Jupiter a hundred years ago."

Direct imaging allows astronomers to understand a planet's orbit, the composition of its atmosphere and the probability it has clouds. Water, methane and carbon dioxide can all be detected with the technique.

"The wealth of information you have is staggering," Currie said.

When the Kepler Space Telescope searched for planets, it used what scientists call the transit method. As a planet passes between its sun and the Earth, the light streaming from the star dims slightly. Scientists can measure that dimming to determine the radius of the planet. After observing multiple passes of the same planet, they can also calculate its orbit. Follow-up observations with other instruments can also reveal information about the planet's atmosphere.

But the space telescope is limited to planets that pass between Earth and their star. Worlds that orbit at other angles can pass by without notice. Direct imaging, on the other hand, doesn't require an ideal lineup. Planets can be imaged in any orbit, from any direction.

While transit observations study close-in planets, direct imaging requires some distance, thanks to the need to block out stellar light. As a result, it is better suited to studying planets farther from their star. Larger planets are easier to capture, but Currie is optimistic that continued improvements in technology will soon spot smaller worlds. Today's directly imaged exoplanets are scaled-up Jupiters, but he said that in the near future, young Jupiters should be viewable.

Over the next decade, three ground-based telescopes will come online that Currie said should revolutionize direct imaging. The European Extremely Large Telescope is scheduled to see first light in 2024. The Thirty-Meter Telescope should also prove a capable planet hunter, although progress on the instrument has been held up due to permit problems. Finally, Currie said that there is a chance that the Giant Magellan Telescope, under construction in Chile, will be able to spot rocky worlds when it comes online in 2025.

NASA's space-based Wide-Field Infrared Survey Telescope (WFIRST) will dramatically improve the hunt for directly imaged exoplanets when it is launched in the mid-2020s. The instrument is designed to be able to detect worlds that lie as far from their star as Earth lies from the sun. It is unlikely that these worlds will be rocky, Currie said. However, it's not outside the realm of possibility, should everything work better than anticipated.

In addition to searching for an Earth twin, direct imaging could help scientists to find potentially habitable worlds.

According to Elisa Quintana, a Kepler research scientist with the SETI Institute and the NASA Ames Research Center, direct imaging could reveal not only the atmosphere of a planet, but also potential biomarkers. It could even reveal life beyond the solar system.

"There's three ways we're going to know if there's other life," she said.

The first is by searching the skies for artificial radio signals. The second is hunting for microbial life within the solar system, in places like Mars or the icy moons of Jupiter and Saturn. And the third method is direct imaging.

According to Quintana, direct imaging "might very well be the first time we detect some form of life."

"It could very well happen within our lifetime," she said.