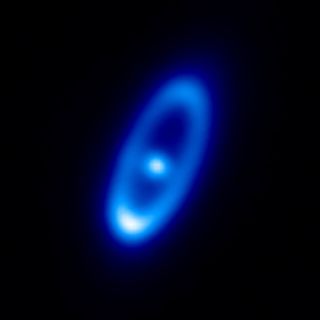 Fomalhaut is a star in the Southern Hemisphere in the constellation Piscis Austrinus. At least one planet orbits this bright star: Fomalhaut b, which was dubbed a "zombie" planet by NASA after its 2005 discovery was debunked as gas, and then proven again in 2012.

Astronomers have been gaping at the planet's strange orbit while also wondering why a huge number of comets populate the regions around the star.

The word "Fomalhaut" derives from an Arabic phrase, Fum Al Hut or "mouth of the fish." The star was listed in the Alfonsine Tables, a medieval listing of stars that was originally written in Spanish.

The Tables, however, spelled the name as "Fomahant." The star has been called by many variations of the name over the centuries, but with the advent of modern astronomy the name was formalized as "Fomalhaut."

As knowledge of the stars improved, Fomalhaut was classified as a "class A" star that has a surface temperature of about 8,500 Kelvin (roughly 14,840 F or 8,225 C), according to astronomer Jim Kaler. Parallax measurements showed that it is about 25 light-years away from Earth, and its luminosity is about 16 times greater than the sun. Its apparent magnitude is 1.16, making it the 18th brightest star in the night sky. [The Brightest Stars in the Sky: A Starry Countdown]

"Almost the same distance as Vega, it is over a full magnitude fainter to the eye as a result of somewhat lower mass of 2.0 solar, which results in a lower surface temperature and smaller size of 1.8 times that of the sun," Kaler wrote. Fomalhaut's location is:

In 2002, astronomers estimated a Saturn-size planet was lurking within Fomalhaut's dust ring, which is a common feature among young stars. Three years later, pictures of the system revealed Fomalhaut and the dust ring looking almost like "the eye of Sauron," a reference from J.R.R. Tolkien's "Lord of the Rings" trilogy.

Instead of being centered on the star, the dust ring was offset in such a way that a planet likely caused the disturbances, astronomers said at the time. "Our new Hubble images confirm those earlier hypotheses that proposed a planet was perturbing the ring," said Paul Kalas of the University of California at Berkeley in 2005.

Then in 2008, astronomers again using Hubble announced they not only had found a planet (Fomalhaut b), but also had taken a picture of it in visible light – the first time that had ever happened. The finding was hotly debated, however. Some scientists said it was likely a dust cloud, a theory they backed up with brightness variations in the discovery team's data. NASA's Spitzer Space Telescope was also unable to detect Fomalhaut b.

A new 2012 analysis of data in 2004 and 2006, however, revealed Fomalhaut b in three wavelengths of visible light and also did not find any brightness variations.

"Although our results seriously challenge the original discovery paper, they do so in a way that actually makes the object's interpretation much cleaner and leaves intact the core conclusion — that Fomalhaut b is indeed a massive planet," said lead author Thayne Currie, an astronomer formerly at NASA's Goddard Space Flight Center in Greenbelt, Md., and in 2012, at the University of Toronto.

More intriguing findings came to light in 2012, when scientists found evidence of a swarm of comets orbiting the star. There could be as many as 83 trillion comets in that system, with thousands of them being destroyed daily as the crash into each other, researchers said.

"I was really surprised," study leader Bram Acke of the University of Leuven in Belgium said in a statement at the time. "To me this was an extremely large number."

Observers noted an unusually high amount of dust in the system, which was unexpected because the starlight from Fomalhaut would be thought to push it away. The equivalent mass of the material in Fomaulhaut's system would be about 110 Earths, a research team said.

"Since we do observe emission from dust in the disc, this blow-out effect must be compensated by a steady production of dust particles via comet collisions," co-author Carsten Dominik of the University of Amsterdam and Radboud Universiteit Nijmegen said in a statement.

Intriguingly, the comets are in a similar location near Fomalhaut as the Kuiper collection of icy objects in Earth's solar system, which reside beyond Neptune's orbit. The dust ring was actually discovered in the 1980s, but came into greater scrutiny through observations from the European Space Agency's Herschel observatory.