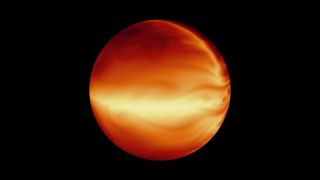 This simulation shows the turbulent atmosphere of HD 80606b, a Jupiter-size planet orbiting very close to its parent star. The colors indicate the temperature of the planet's atmosphere. The coolest regions are less than 400 degrees Fahrenheit (200 degrees Celsius), and the hottest are more than 2,000 F (1,090 C).
(Image: © NASA/JPL-Caltech/MIT/Principia College)

Because Earth's solar system does not host any hot Jupiters (the giant planets are further out, and smaller planets orbit closer to the star), scientists have to rely on observations of distant planetary systems to solve this mystery.

Now, a new study of a distant hot Jupiter's has thrown a wrench in the leading hypothesis for how hot Jupiter system form. The Spitzer Space Telescope studied HD 80606b, a Jupiter-size planet that gets so close to its parent star that it burns at 2,000 degrees Fahrenheit (1,100 degrees Celsius) on the sunlit side. [Why 'Hot Jupiter' Exoplanets Aren't Eaten by Their Stars]

The video above shows the Jupiter-size planet's extremely eccentric orbit — meaning the orbital path is more oblong than circular, taking the planet very close to the parent star and then farther away. Observations of the 111-day orbit suggest that the planet is spiraling into its parent star very slowly, according to a statement from NASA.

This finding counters the leading hypothesis for "hot Jupiter" formation, which suggests that these planets migrate toward their parent star over hundreds of millions of years due to the gravitational influence from a nearby star or another planet. More important, that theory suggests that the planets should settle into circular orbits close to the star.

"[HD 80606b] is thought to be caught in the act of migrating inward," Julien de Wit, a postdoctoral planetary scientist at the Massachusetts Institute of Technology and lead author of the study, said in a statement from NASA. "By studying it, we are able to test theories of hot Jupiter formation."

This is actually the second time that the Spitzer Space Telescope has studied HD 80606b; it last examined the planet in 2009. This time, however, investigators had a longer observing time (85 hours), and improvements have been made in the telescope's sensitivity to exoplanets. The new observation showed the team how cold the planet gets, how fast it heats up and its rotational speed, among other things.

Data from the Spitzer telescope show that the planet does not dissipate much heat and that its orbit will take an astounding 10 billion years or more to become circular. That contradicts the existing theory because the universe is less than 14 billion years old.

"The long time scales we are observing here suggest that a leading migration mechanism may not be as efficient for hot-Jupiter formation as once believed," Greg Laughlin, an astronomer at the University of California, Santa Cruz, and a co-author of the study, said in the same statement.

Instead, data from the Spitzer telescope suggest that some competing theories may be responsible for hot Jupiters. In these scenarios, the planets either form close to their star or are pushed there with help from planet-forming discs.