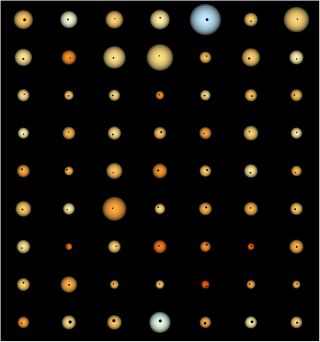 Searching for Earth-like planets in alien solar systems with "hot Jupiter"-type worlds may be fruitless, a new study suggests. The process to build a giant hot Jupiter may be incompatible with smaller worlds.
(Image: © Fermilab Center for Particle Astrophysics)

Hot Jupiters get their name from the fact that they are approximately Jupiter's size, but extraordinarily near their stars, at about a tenth of the distance from Mercury to our sun. These roaster planets are among the alien worlds that astronomers have discovered most often since their size and proximity to their parent stars mean they exert large gravitational tugs on their hosts that scientists can readily spot.

This planet-finding technique, known as the "wobble method," detects the presence of giant planet near a star by the wobble motion induced on the star by the planet's gravity. The closer and larger the alien planet is, the more pronounced the wobble.

To explain how hot Jupiters form, researchers have developed two broad classes of explanations — one that also predicts the presence of nearby companion planets, and one that does not. Astronomers recently detected more than 2,000 candidate alien worlds with NASA's Kepler spacecraft, and by looking at whether hot Jupiters were found together with other types of planets, they can begin to pin down which theory of hot Jupiter formation is correct.

Astronomers looked at 63 hot Jupiter candidates. They found no compelling signs of planets elsewhere in their systems. [Gallery: Alien Planets Discovered by Kepler]

"A sample of 63 is an order of magnitude larger than all of the previous studies combined, making the results pretty definitive," study lead author Jason Steffen, an astrophysicist at the Fermilab Center for Particle Astrophysics in Batavia, Ill., told SPACE.com. "It should give people who model planet formation a good piece of information to work with."

The researchers also investigated other planet types. These included 31 "warm Jupiters," gas giants orbiting a bit farther away from their stars, as well as smaller worlds, including 52 "hot Earths" and 222 "hot Neptunes." These may often be found in multi-planet systems.

Models that suggest hot Jupiters are loners propose that these giants initially had highly elliptical orbits that eventually shrunk over time into tight, circular paths. As they migrate inward, their gravitational pull would likely scatter other planets away from their systems, which would explain the apparent solitude of hot Jupiters.

Still, Steffen warned that it may be possible that their results could miss very small planets that lie in the same systems as hot Jupiters, or planets in distant orbits.

The scientists detailed their findings online May 7 in the journal Proceedings of the National Academy of Sciences.