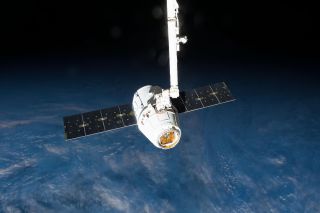 The Canadarm2 robotic arm prepares to release SpaceX's Dragon cargo spacecraft from the International Space Station in May 2015. This same Dragon is scheduled to arrive at the orbiting lab on Dec. 17, 2017.
(Image: © NASA)

There's a lot of spaceflight action on tap Sunday morning (Dec. 17), and you can watch it all before the first NFL game of the day kicks off.

A few hours later, SpaceX's robotic Dragon capsule — which launched atop a Falcon 9 rocket Friday morning (Dec. 15) — is scheduled to arrive at the ISS on a cargo run for NASA. Coverage of the freighter's rendezvous and capture by the station's huge robotic arm begins at 4:30 a.m. EST (0930 GMT), and coverage of Dragon's installation on the ISS starts 3 hours later, at 7:30 a.m. EST (1230 GMT). [In Photos: SpaceX Launches Used Falcon 9 Rocket, Dragon Capsule on CRS-13]

Again, Space.com will carry the NASA TV feed for Dragon's arrival. You can also watch live directly via NASA TV.

The three spacefarers ready to lift off from Baikonur Sunday are NASA astronaut Scott Tingle, cosmonaut Anton Shkaplerov and Japan Aerospace Exploration Agency astronaut Norishige Kanai. If all goes according to plan, the trio will get to the ISS early Tuesday (Dec. 17), joining the three crewmembers already aboard the orbiting lab: NASA's Joe Acaba and Mark Vande Hei and cosmonaut Alexander Misurkin.

Friday's Dragon launch marked a reusability milestone for SpaceX: Never before had the company launched a pre-flown spacecraft atop a pre-flown rocket. (This particular Dragon first visited the ISS in spring 2015, and the first stage of the Falcon 9 that lofted it helped launch a Dragon mission this past June.) The launch was also a first for NASA, which had never previously approved employing a used Falcon 9 on a resupply run.

The Dragon is loaded up with about 4,800 lbs. (2,177 kilograms) of scientific experiments and other supplies for the ISS crew. Among the research gear on board is a space-junk sensor, an instrument that will measure the sun's energy input to Earth and a privately built machine that will manufacture an exotic optical fiber in space, for eventual inspection and sale back here on Earth.

The cargo capsule is scheduled to stay attached to the ISS until mid-January, NASA officials said. The Dragon will then detach and make its way back home for a parachute-assisted ocean splashdown.