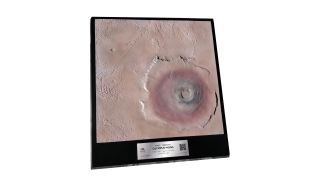 After a decade-long hiatus from making replicas of sci-fi movie props and other cool space-themed collectibles, Master Replicas is back in business with some stellar new products.

Using data from NASA satellites and new, 3D printing technologies, Master Replicas Group has re-created two remarkably detailed models of Tycho crater on the moon and Olympus Mons, the largest volcano in the solar system. Each limited-edition model measures about 10 square inches (25 square centimeters) and comes with a special display plaque that can hang on a wall or stand on a shelf. [Space Gifts 2017: The Best Gift Ideas in the Universe]

By combining radar data and high-resolution photography from the Lunar Reconnaissance Orbiter, Mars Global Surveyor and Mars Reconnaissance Orbiter missions, "we were able to get an extra level of detail on them, which made them much more authentic," Steve Dymszo, CEO of Master Replicas Group, told Space.com.

These colorized, cast-resin terrains are made with a remarkably detailed resolution of 16 microns (0.0006 inches). For comparison, most commercial 3D printers have a resolution of around 100 microns, or the average width of a human hair. The replicas look so authentic that it can be difficult to distinguish a photo of the models from real satellite images.

Both space terrains are for sale on the Master Replicas Group website for $120 each. Because they are limited-edition items, only 1,500 units will be sold. Each plaque is numbered and contains a scannable QR code that will take you to a website where you can learn all about your space terrain.

Tycho and Olympus Mons are the first two models in Master Replicas Group's new "space terrain" series of products. The company has plans to roll out more solar system landmarks in the future and has its eyes set on Valles Marineris (the "Grand Canyon" of Mars) and several other prominent lunar craters.