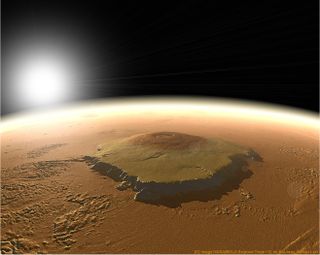 Olympus Mons is the largest volcano in the solar system. The massive Martian mountain towers high above the surrounding plains of the red planet, and may be biding its time until the next eruption.

Found in the Tharsis Montes region near the Martian equator, Olympus Mons is one of a dozen large volcanoes, many of which are ten to a hundred times taller than their terrestrial counterparts. The tallest of them all towers 16 miles (25 kilometers) above the surrounding plains and stretches across 374 miles (624 km) — roughly the size of the state of Arizona.

In comparison, Hawaii's Mauna Loa, the tallest volcano on Earth, rises 6.3 miles (10 km) above the sea floor (but its peak is only 2.6 miles above sea level). The volume contained by Olympus Mons is about a hundred times that of Mauna Loa, and the Hawaiian island chain that houses the Earthly volcano could fit inside its Martian counterpart.

Olympus Mons is a shield volcano. Rather than violently spewing molten material, shield volcanoes are created by lava slowly flowing down their sides. As a result, the mountain has a low, squat appearance, with an average slope of only 5 percent.

Six collapsed craters, known as calderas, stack on top of one another to create a depression at the summit that is 53 miles wide (85 km). As magma chambers beneath the calderas emptied of lava, most likely during an eruption, the chambers collapsed, no longer able to support the weight of the ground above.

A cliff, or escarpment, surrounds the outer edge of the volcano, reaching as high as 6 miles (10 km) above the surrounding area. (The cliff alone is about as tall as Mauna Loa.) A wide depression surrounds the base of the volcano as its immense weight presses into the crust.

Olympus Mons is still a relatively young volcano. Although it has taken billions of years to form, some regions of the mountain may be only a few million years old, relatively young in the lifetime of the solar system. As such, Olympus Mons may still be an active volcano with the potential to erupt.

"On Earth, the Hawaiian islands were built from volcanoes that erupted as the Earth's crust slid over a hot spot — a plume of rising magma," said Jacob Bleacher, a planetary scientist at Arizona State University and NASA's Goddard Space Flight Center in Greenbelt, Md, told Space.com. "Our research raises the possibility that the opposite happens on Mars; a plume might move beneath stationary crust."

The tallest volcano in the solar system may also house rock glaciers — rocky debris frozen in ice. Snow and ice deposits above the base of the shield could result in such glaciers. Water-ice insulated by surface dust may exist near the top of the volcano. The tops of these glaciers may host ridges, furrows, and lobes, and be covered by rocks and boulders, and could be as young as four million years old.

Why would such a huge volcano form on Mars but not on Earth? Scientists think that the lower surface gravity of the red planet, combined with higher eruption rates, allowed for the lava on Mars to pile up higher.

The presence and absence of tectonic plates could also play an important role in the different kinds of volcanoes. The hot spots of lava under the crust remain in the same location on both planets. On Earth, however, the movement of the crust prevents the steady buildup of lava. The Hawaiian Islands, for instance, formed as a plate drifted over a hot spot. Each eruption created a small island in a different spot.

But Mars has very limited plate movement. Both the hot spot and the crust remain unmoving. When lava flows to the surface, it continues to pile up in a single spot. Instead of a chain of volcanic islands, large volcanoes such as Olympus Mons form. In fact, three other large volcanoes near Olympus Mons are similarly gigantic; if only one of the four volcanoes in the region existed, it would be the tallest feature in the solar system.

(One researcher, An Yin of UCLA, has proposed that Mars still has plate tectonics. "I think there's good evidence for it," Yin told Space.com. But most researchers disagree.)

In addition to the lack of plate movement, the growth of Olympus Mons was aided by its extended lifetime. While we don't have any rovers exploring the mountains right now, planetary scientists manage to probe the volcanoes with rocks from Earth. By studying six nakhlite meteorites from Mars previously established as volcanic, scientists confirmed the extensive lifetime of Martian volcanoes.

We found that the nakhlites formed from at least four eruptions over the course of 90 million years," Benjamin Cohen, a planetary scientist at the University of Glasgow in Scotland, said in a statement. "This is a very long time for a volcano, and much longer than the duration of terrestrial volcanoes, which are typically only active for a few million years."

The meteorites were blown into space when a massive rock crashed into the planet 11 million years ago.

"And this is only scratching the surface of the volcano, as only a very small amount of rock would have been ejected by the impact crater — so the volcano must have been active for much longer," Cohen said.

Another group of 11 Martian meteorites revealed that the volcanoes were active even longer. While 10 were only 500 million years old, an eleventh, NWA 7635, was found to be 2.4 billion years old.

"What this means is that for 2 billion years there's been sort of a steady plume of magma in one location on the surface of Mars," researcher Marc Caffee, a professor of physics and astronomy at Purdue University in Indiana, said in a statement. "We don't have anything like that on Earth, where something is that stable for 2 billion years at a specific location."

The volcanoes in Tharsis Montes are so large that they tower above the seasonal Martian dust storms. Italian astronomer Giovanni Schiaparelli, who studied the Martian surface intensively in the late 19th century, observed the enormous features from Earth using an 8-inch (22 centimeter) telescope. When NASA's Mariner 9 arrived at the red planet in 1971, it was able to pick out the tops of the volcanoes above the storms.

While no rovers have yet made the trek to the Martian mountains, that hasn't stopped many from dreaming about exploration. 4th Planet Logistics, a company that describes itself as "founded for the purpose of designing, building, and evaluating human habitat structures and related support components for utilization on the Moon, Mars, and beyond," is looking to create a virtual-reality climbing route for the enormous mountain.

"I'd like to extend a personal invitation to become involved in our effort to establish a climbing route to the summit of Olympus Mons," 4th Planet Logistics founder and director Michael Chalmer Dunn said in a post on the company's blog.

So while it might be awhile before you can physically climb the massive volcano, you may be able to at least explore it visually.

In fact, some scientists have used the High Resolution Stereo Camera installed on the European Mars Express orbiter to create a mosaic and terrain model of the volcano.