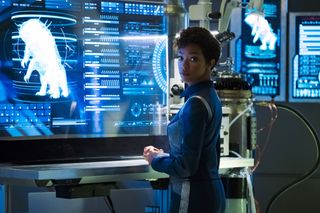 With Michael Burnham (Sonequa Martin-Green) now assigned to the USS Discovery's science division, "rank none," we started Episode 4 hoping to learn more about the mysterious spore drive. While we get a few more clues, the secondary plot involving the Klingons was far more compelling, especially because the episode overall was extremely confusing.

Episode 3 featured the return of technobabble, familiar to "Star Trek" fans, but Episode 4 had so much science to wade through that it was difficult to understand on a first watch. So, let's strip the plot down to its essentials before getting into the weeds — or spores, as you'll quickly learn about this episode's focus. [6 "Star Trek" Captains Ranked Worst to Best]

Burnham, who still gets the stink eye from fellow crew members as she roams the USS Discovery, has her first long-term Starfleet assignment since the mutiny: Find out more about the mysterious creature that tore up the crew of the USS Glenn, along with the attacking Klingons.

While Burnham tries to figure that out, the Klingons break through the blockade surrounding a small mining colony, the Corvan 2. Since the USS Discovery is the only Starfleet ship able to reach the colony in time, it's the natural candidate for a rescue operation. Trouble is, Discovery's daring rescue relies on the unreliable spore drive getting the ship there in time, when such a large jump has never been tested. In fact, their first attempt leads to the ship materializing in a star's gravitational well, narrowly avoiding a fiery fate.

Meanwhile, we see the Klingons again for the first time since the series opener. The Torchbearer, Voq (Javid Iqbal) — who was appointed leader of the House of T'Kuvma in that episode despite his non-noble background — gets a visit from Kol (Kenneth Mitchell), the leader of House Kor. The two houses work together to get a dilithium drive, which the Klingons need to escape the battlefield where they engaged the USS Shenzhou six months earlier.

We first saw Voq in the double-header Episodes 1 and 2, where Klingons made fun of him because of his albino skin. But he doesn't let the insults interfere with his respect for tradition. A follower, L'Rell (Mary Chieffo), points out the Shenzhou's dilithium drive could save his clan. Voq responds, "To fuse its technology with our own would be a blasphemy."

Replies L'Rell: "What good is purity if it leads only to death?"

Convinced, Voq and L'Rell beam over to the Shenzhou and carefully remove the dilithium drive (the upside-down shot of one of the Klingons walking in a spacesuit is especially cool). When they return, Voq and L'Rell discover Kol providing food to the stricken, starving crew members of House T'Kuvma in exchange for their loyalty. L'Rell joins them, hands over the dilithium drive and sentences Voq to death inside the Shenzhou. [15 of the Most Bizarre Alien Species Featured in Star Trek]

The understandably upset Voq watches the Klingons leave him behind, but L'Rell materializes behind him in a transporter beam. Turns out she has a bigger strategy — she's going to bring Voq to the House of Mo'Kai, where Voq is going to learn some information that will help him bring the Klingons back to prominence. The catch? Voq will have to sacrifice "everything" — and what that means is not yet clear.

While the Klingon scriptwriting could have used some simplification, this plot does open up some intriguing possibilities for future episodes. We're already impressed that the Klingons speak fully in Klingon and that the show doesn't portray them mainly as bloodthirsty enemies (a problem with some past versions of Trek). How much more of their culture will we learn about? How will this influence their relations with Starfleet during the first encounters? Let's hope future episodes get to this quickly, as this is an unexplored frontier of the early Trek universe.

Meanwhile, back on the USS Discovery, Burnham quickly decides the creature that attacked the USS Glenn was merely acting in self-defense. She discovers a connection — both in behavior and in brain activity — between the creature and the spore drive. Burnham also finds the creature is similar to a tardigrade, which is a microscopic creature on Earth that can live in extreme cold or heat. (From then on, she starts calling the creature "the tardigrade," so we'll just go with it here.) [8-Legged Extremophile Freaks Will Outlive Humanity (& Maybe the Sun)]

Things get bad quickly when Cmdr. Landry (Rekha Sharma) gets impatient with Burnham's careful investigation of the tardigrade, insisting that they need to find out its offensive capabilities. Landry opens the containment pen, the tardigrade attacks her, she fires her weapon and is fatally wounded. (Side note: That was a rather abrupt end for Sharma, who got the red-shirt treatment despite being known to sci-fi fans for her long-time performance on "Battlestar: Galactica" in 2004.)

A stern Capt. Gabriel Lorca (Jason Isaacs) says Burnham needs to find a use for this tardigrade ― and fast ― to help kill the Klingons. Through a bunch of logical leaps that we'll skip over in the interest of time, Burnham and Lt. Stamets (Anthony Rapp) discover equipment originally found on the USS Glenn that can interface with the tardigrade, providing excellent control over the recalcitrant spore drive.

With the tardigrade's help, the USS Discovery successfully rescues the Corvan 2 — but it comes at a cost to the tardigrade, who is in great distress after it is hooked up to the spore drive. Burnham is upset, but for now does nothing.

While the tardigrade-spore machine connection is intriguing, it's sort of in a "so what" sense because it's badly explained. So many questions that need answering — how are they supposed to use the tardigrade for the drive when the creature is so damaged after one use? And how did that tardigrade get on the USS Glenn in the first place? (We received a vague answer about the tardigrade following the spores, but how exactly did it get in, and could it break out of the USS Discovery in the same way, if it's mad enough?)

It didn't help that the science was so dense that I had to keep pausing the episode to back up and take detailed notes. While this kind of science is necessary when discussing a journal paper, on a TV show it's liable to lose viewers quickly. Let's hope "Discovery" moves back into a meaningful plot at warp speed as it enters the latter half of its initial eight-episode release.

Our only hint of good storytelling on the human side came from Stamets' growing resentment with the military's use of his technology. He threatens in this episode to pull all his equipment off the ship, but Lorca says Stamets can't because everything on the ship is the property of Starfleet. Stamets sulks through the rest of the episode, but we can't help but think this issue will come up yet again — and lead to him doing something interesting.

The next episode of "Star Trek Discovery" airs Sunday (Sept. 15) on CBS All Access, an online subscription service available to U.S. viewers.