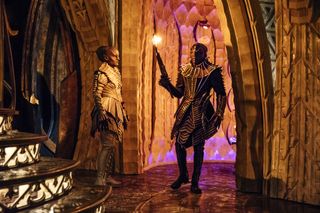 "Star Trek: Discovery" opened on CBS All Access Sunday night (Sept. 24) with a powerful opening shot after 12 years of absence from television. This is not your grandparent's "Star Trek," nor your parents'. It's darker, as Starfleet faces the Klingons for the first time in generations. And as one officer eloquently puts it, "Retreat is not an option."

It's Earth in the year 2256, and First Officer Michael Burnham (Sonequa-Martin Green, best known for "The Walking Dead") is just about to get command of her own ship. But circumstances change quickly when Burnham, Capt. Georgiou (Michelle Yeoh, whose notable credits include the James Bond film "Tomorrow Never Dies") and the crew of the USS Shenzhou come across a strange energy signature in a ring field.

Green persuades the captain to let her take a look at the object, even though her DNA will be torn apart in less than 20 minutes due to the intense radiation. When Green lands on the ship, it turns out to house Klingon warriors intent on taking over the Federation space. Green fights and kills a Klingon menacing her on the ship's hull, and sets off a brutal interspecies war involving dozens of Klingon and Starfleet ships. [In Photos: 'Star Trek: Discovery' Premiere Hits Hollywood at Warp Speed]

The action hardly lets up in the intense 2-hour premiere, which throws in a few tropes for longtime "Star Trek" fans. One of the first scenes show Burnham and Georgiou bantering about the Prime Directive, which calls for noninterference with alien species if they are not at a sufficient level of civilization. There are Klingons – speaking almost exclusively in Klingon, which is refreshing – and Vulcans, mostly represented by Spock's father, Sarek (James Frain).

And for newer arrivals to the series, there are amazing special effects and plenty of intrigue to keep even novice Starfleet wannabes glued to the screen. Watch for the battle sequences and the views of the ring field. As for action, Burnham quickly violates Starfleet and "Star Trek" protocol by committing mutiny, a move made all the more shocking because she grew up with the logical and loyal Vulcans and is trained in their tradition.

Burnham is thrown in the brig at the height of the attack, and nearly dies when several of the ship's decks are blown away. Instead of panicking, she harnesses Vulcan logic and, in a slightly humorous moment, negotiates with the ship's computer to let her leave under ethical grounds; the force field holding in her oxygen is only minutes from failing. [The 15 Best Ships on Star Trek, from V-ger to the Vengeance]

This sets the stage for a fun encounter with the Klingons on their own ship, a massive complex that is shrouded by the tombs of dead Klingons attached to the hull. Although Georgiou says she misjudged Burnham's readiness for being a captain, the pair rush over to the ship to try to stop the Klingons. The encounter proves fatal for Georgiou. And Burnham, transported back to safety and racked by grief, is eventually stripped of her rank and thrown into prison for life, at least according to the panel of judges judging her case.

This being a "Star Trek" show, we guess that Burnham won't be stuck in a cell for long. But what a powerful opening episode. Instead of a crew staidly following procedure on a ship, we have a renegade  first officer working outside the confines of Starfleet.

Hints from future episodes promise us a show outside the usual confines of ships, on-screen discussions with foreign species and landings on the occasional planet. Instead, we'll have episodes with prisoners, and with people who are resentful of Starfleet's role in their lives.

Welcome back to TV, "Star Trek," and may your series live long and prosper.