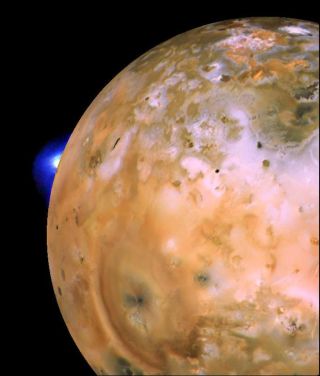 NASA's historic Voyager mission has now been exploring the heavens for four decades.

The Voyager 2 spacecraft launched on Aug. 20, 1977, a few weeks before its twin, Voyager 1. Together, the two probes conducted an unprecedented "Grand Tour" of the outer solar system, beaming home up-close looks at Jupiter, Saturn, Uranus, Neptune and many of the moons of these giant planets.

This work revealed a jaw-dropping diversity of worlds, fundamentally reshaping scientists' understanding of the solar system. And then the Voyagers kept on flying. In August 2012, Voyager 1 became the first spacecraft ever to reach interstellar space — and Voyager 2 is expected to arrive in this exotic realm soon as well. [Voyager at 40: 40 Photos from NASA's Epic 'Grand Tour' Mission]

Ed Stone has served as Voyager project scientist since the mission's inception back in 1972. Space.com recently caught up with Stone, who talked about the 40-year anniversary, Voyager's greatest accomplishments and the mission's legacy.

Space.com: How does this 40-year milestone make you feel? What are your biggest impressions?

Ed Stone: It's amazing that the two spacecraft are still working after 40 years. When we launched, the Space Age itself was only 20 years old, so this is an unparalleled journey, and we're still in the process of discovering what's out there. Voyager 1 is out there in interstellar space; Voyager 2 is still inside, and we're seeing what's happening to the solar wind as it approaches interstellar space.

Space.com: Do you have an idea of when Voyager 2 will pop free into interstellar space?

Stone: Voyager 1 actually left the heliosphere in the nose region — that is, the region that faces into the interstellar wind, so that's the shortest way out. Voyager 2 is off to the flank of where the wind direction is, so the distance will be different. We don't know exactly how much different, because the models are not accurate enough to tell us that. But we can kind of estimate it from what Voyager 1 saw as it was approaching the boundary, the heliopause, and that suggests maybe several [more] years.

Space.com: What has Voyager 1 taught us about interstellar space so far?

Stone: It's really telling us how the interstellar wind interacts with the solar wind. Each star has wind blowing radially out from it. In the case of the sun, it's called the solar wind; it's the atmosphere of the sun speeding away in a million-mile-per-hour wind, which creates a bubble around the heliosphere. The bubble's size is determined by how much pressure there is from the interstellar wind outside, which came from explosive supernovae.

Another thing we've learned is how intense the cosmic radiation is out there. Cosmic rays are the nuclei of atoms that were accelerated by supernova explosions to nearly the speed of light. The fastest ones can easily get in to Earth; they were discovered here over 100 years ago. But the slower ones, the ones that are moving only 5 percent the speed of light or less, can't get in. And so we had no idea what the intensity of the cosmic radiation was outside the bubble.

We now know. The amount that gets in depends on the solar cycle, but we can say that less than a quarter of what's outside gets in. So the heliosphere is basically a radiation shield for all the planets, because it can exclude three-quarters of what's outside from getting in. We'll continue to monitor those cosmic rays now that we're out there, and we expect that Voyager 2 will find exactly the same story. If it doesn't, that will be a major surprise, because we think it's a pretty uniform environment now that we're outside.

Space.com: That was one of the mission's biggest accomplishments, obviously — reaching interstellar space and studying the environment there. Which of Voyager's other achievements stand out to you? Do you have any favorites?

Stone: Yes, I have a lot of favorites, actually! But I always like to think of Io, because it really set the stage for what was ahead. Io is a moon of Jupiter, and it's about the size of our moon. Before Voyager, the only known active volcanoes were here on Earth. And then we flew by Io with Voyager 1 and discovered eight erupting volcanoes — 10 times the volcanic activity of Earth, on this small moon. And it really set the stage for the fact that we were on a mission of discovery; we hadn't imagined the sorts of things we would be seeing.

Another one: In orbit around the same planet is Europa, which has an icy crust. It's again about the size of our moon. There are no volcanoes on Europa, but it has an icy crust which is cracked and certainly suggested that there could be a liquid-water ocean beneath. And again, before Voyager, the only oceans that were known were right here on Earth. It turned out, when [NASA's] Galileo [spacecraft] returned some years later and orbited [Jupiter] a number of times — it was able to show there was indeed a water ocean beneath the icy crust. [Photos: Europa, Mysterious Icy Moon of Jupiter]

Those are sort of two that kicked off the journey. Then we flew by Saturn, and its [biggest] moon Titan. Again, the only nitrogen atmosphere that we'd found in the solar system up until then was here on Earth. And yet, when we got to Titan, it has an atmosphere which is 1.5 times the pressure of the atmosphere on Earth — higher pressure, denser and much colder, of course. It may in some important ways resemble what the Earth's atmosphere was like before life evolved and created the oxygen that we all breathe.

Space.com: Are there any other surprises that really jumped out at you?

Stone: Well, before Voyager, all the magnetic fields seen at planets were like the Earth's magnetic field. That is, the magnetic pole is near the rotational pole of a planet. That was, we thought, because the magnetic field is created by the rotation of the liquid material beneath a planet's surface; therefore, the alignment seemed quite reasonable. And then we flew by Uranus and found its magnetic pole was nearer the equator than it was to the pole of rotation. And the same came true at Neptune. So this was not just an accident; in fact, these giant planets can have magnetic fields quite distinctly different in their orientation than what we had found at Jupiter and Saturn and Earth and Mercury.

Space.com: So, we're at 40 years now. How much longer will the Voyagers be able to keep gathering data and beaming it home to Earth?

Stone: The power supply is the natural radioactive decay of plutonium-238, which creates heat, and that is converted to electricity with thermocouples. So we can predict fairly accurately how much power we have, and how much less power we'll have each year, because of radioactive decay — it's decaying away. Every year now, we're in a mode where we have to turn off something that uses 4 watts, because we will have 4 watts less next year than we have this year. We have about 10 years or so of power remaining until we have only enough to power the spacecraft itself, without any of the instruments. That's on the order of 10 years from now.

But even after we no longer have power to send any data back to Earth, the two Voyager spacecraft will continue their orbit around the Milky Way, around the center of the galaxy with all the stars. Every 225 million years, they will complete another orbit around the Milky Way. And they will be doing that for billions of years, long after the Earth has been enveloped by the red giant sun. They'll be our silent ambassadors, with messages about where the place was that sent them so many billions of years earlier. [Photos from NASA's Voyager 1 and 2 Probes]

Space.com: Can you imagine life without Voyager at this point? Or is it just such a part of you that it's impossible to place yourself in an existence that doesn't involve Voyager?

Stone: Voyager's been at the center of my career, that is for sure. And it has allowed me to work on other projects, other missions. We've just finished and delivered an instrument for the Parker Solar Probe, which will launch in July of next year. That's the probe that will drop in near the sun, step by step, getting closer and closer. It's really exciting — that's what I call the inner frontier. It's where the solar wind begins.

Space.com: How do you think future generations will remember Voyager? What will the mission's main legacy be?

Stone: I think what Voyager has done is reveal how diverse the planets and the moons and the rings, and the magnetic fields of the planets, are. Our terracentric view was just much narrower than, in fact, reality. And now, of course, we know about planetary systems around other stars. There are many of them out there, and we have not found any that look like this one. So once again, it even expands the variability and diversity of what there is to be learned.

I'm hoping that, although it's not clear that we can ever send a spacecraft to one of these other systems, we can certainly improve our capabilities to observe them and study them and search for any evidence that perhaps at least microbial life has evolved on at least some of those planets, as it has here on Earth.