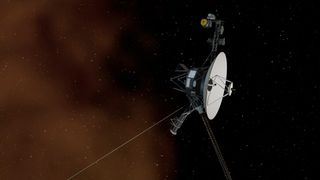 A spacecraft from Earth has left its cosmic backyard and taken its first steps in interstellar space.

"Voyager has boldly gone where no probe has gone before, marking one of the most significant technological achievements in the annals of the history of science, and as it enters interstellar space, it adds a new chapter in human scientific dreams and endeavors," NASA science chief John Grunsfeld said in a statement. "Perhaps some future deep-space explorers will catch up with Voyager, our first interstellar envoy, and reflect on how this intrepid spacecraft helped enable their future." [Voyager 1 in Interstellar Space: Complete Coverage]

A long and historic journey

Voyager 1 launched on Sept. 5, 1977, about two weeks after its twin, Voyager 2. Together, the two probes conducted a historic "grand tour" of the outer planets, giving scientists some of their first up-close looks at Jupiter, Saturn, Uranus, Neptune and the moons of these faraway worlds.

The duo completed its primary mission in 1989, and then kept on flying toward the edge of the heliosphere, the huge bubble of charged particles and magnetic fields that the sun puffs out around itself. Voyager 1 has now popped free of this bubble into the exotic and unexplored realm of interstellar space, scientists say.

They reached this historic conclusion with a little help from the sun. A powerful solar eruption caused electrons in Voyager 1's location to vibrate signficantly between April 9 and May 22 of this year. The probe's plasma wave instrument detected these oscillations, and researchers used the measurements to figure out that Voyager 1's surroundings contained about 1.3 electrons per cubic inch (0.08 electrons per cubic centimeter).

"We literally jumped out of our seats when we saw these oscillations in our data — they showed us that the spacecraft was in an entirely new region, comparable to what was expected in interstellar space, and totally different than in the solar bubble," study lead author Don Gurnett of the University of Iowa, the principal investigator of Voyager 1's plasma wave instrument, said in a statement.

It may seem surprising that electron density is higher beyond the solar system than in its extreme outer reaches. Interstellar space is, indeed, emptier than the regions in Earth's neighborhood, but the density inside the solar bubble drops off dramatically at great distances from the sun, researchers said.

The study team wanted to know if Voyager 1 left the solar system sometime before April 2013, so they combed through some of the probe's older data. They found a monthlong period of electron oscillations in October-November 2012 that translated to a density of 0.004 electrons per cubic inch (0.006 electrons per cubic cm).

Using these numbers and the amount of ground that Voyager 1 covers — about 325 million miles (520 million kilometers) per year — the researchers calculated that the spacecraft likely left the solar system in August 2012.

That time frame matches up well with several other important changes Voyager 1 observed. On Aug. 25, 2012, the probe recorded a 1,000-fold drop in the number of charged solar particles while also measuring a 9 percent increase in fast-moving galactic cosmic rays, which originate beyond the solar system.

"These results, and comparison with previous heliospheric radio measurements, strongly support the view that Voyager 1 crossed the heliopause into the interstellar plasma on or about Aug. 25, 2012," Gurnett and his colleagues write in the new study.

Mission scientists have long pegged Voyager 1's departure from the solar system on the observation of three phenomena: a big drop in solar particles, a dramatic jump in galactic cosmic rays and a shift in the orientation of the surrounding magnetic field.

Voyager 1 has measured the first two changes, as noted above, but not the third; the magnetic field is stronger than it used to be in the probe's location, but it hasn't changed direction.

This key point has led NASA and the mission team to proceed with caution. For example, they have held off on making any big announcements, despite several recent studies by outside researchers — including one published last month— suggesting that Voyager 1 entered interstellar space in July or August 2012.

But the new electron-density measurements have convinced Voyager mission scientists that the probe is, indeed, beyond the solar bubble.

After all, magnetic-field measurements were always regarded as a proxy for observations of electron density, said Voyager chief scientist Ed Stone, a physicist at the California Institute of Technology in Pasadena.

(Voyager 1 launched with an instrument designed to measure plasma density directly, but it failed in 1980, forcing the team to get more creative.)

Scientists need a better understanding of the complex interface between the solar and galactic magnetic fields to figure out why Voyager 1 hasn't measured the predicted change in field direction, Stone said.

"What we need to do now is go back and look more carefully at the models of that interaction," he said.

The Voyager mission has racked up a series of discoveries over the last 36 years, revealing key insights about the giant planets and their moons, as well as conditions at the edge of the solar system.

The spacecraft's arrival in interstellar space could bring many more exciting finds, the researchers said.

"Every day we look at data, we know we're looking at data that no one has seen before and is in a region where nothing has ever been before," Stone said. "I think we're all looking forward to learning a lot in the years ahead."

Voyager 1 could keep beaming data home for a while, provided nothing too important breaks down. The spacecraft's declining power supply won't force engineers to shut off the first instrument until 2020, mission scientists have said. All of Voyager 1's science gear will probably stop working by 2025.