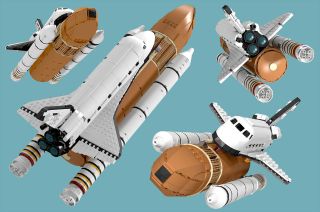 Andrew Harkins has designed a Lego model of NASA’s space shuttle to scale with the toy company’s recently released Saturn V rocket. The shuttle needs 10,000 votes on the Lego Ideas website to be considered by Lego for production.
(Image: © Andrew Harkins/Lego Ideas)

Could NASA's space shuttle be the next real-life launch vehicle to enter the Lego universe?

A fan-designed model of the reusable winged spacecraft has soared to more than 6,500 votes on the Lego Ideas crowdsourcing website since lifting off less than a month ago. The space shuttle needs 10,000 votes to be considered for production by the Denmark-based toy company.

"The historic space shuttle did so much for connecting the world, exploring deep space and conducting groundbreaking research," wrote Andrew Harkins on Lego Ideas, describing his "NASA Space Shuttle" set. As of Tuesday (Aug. 8), Harkins' shuttle was the 16th most supported project out of more than 1,800 active submissions.

"This set is built to the same scale as the Lego Saturn V, and would make the perfect companion piece!" states Harkins, who goes by the username KingsKnight on Lego Ideas. The space shuttle is Harkins' first submission to the website since joining five years ago.

The fully-assembled Lego Saturn V rocket stands 3.28 feet tall (1 meter), making it about 1:111 scale. Harkins' shuttle, if approved, would top out at 20 inches (50.4 centimeters) to match its relative size to the moon booster.

The scale of Harkins' model is one of the key differences that sets it apart from the other space shuttles that were released by Lego in the past. Dating back to 1990, the toy company has produced a dozen different building kits themed around the winged orbiter. At least one, introduced in 2003, was directly modeled on the real shuttle Discovery, though most — including the 3-in-1 Space Shuttle Explorer now for sale — were a mix of reality and fantasy.

The set closest to Harkins' proposed design, the 2010 "Shuttle Adventure" (or its 2011 re-issue, "Shuttle Expedition") included the orbiter, orange external fuel tank and twin solid rocket boosters, but was too small at 17 inches tall (44 cm) to be in scale with the Saturn V.

Harkins' Lego shuttle is also more faithful to the relative dimensions between the real launch vehicle's three major components and the shapes of each. His orbiter includes a docking system, the Canadarm robotic arm and a satellite in its payload bay, as well as functional elevons, body flap and split tail speed brake. [Lego Space: Building the Future With Toy Bricks (Gallery)]

In addition to complimenting the Lego Saturn V, Harkins also notes that his set could also help mark the completion of a 1:1 scale display.

"In 2019, the California Science Center [is scheduled to] finish construction on an unprecedented display of the space shuttle Endeavour, setting it in its vertical full stack configuration," he wrote. "What better way to celebrate this achievement by remembering this iconic ship in Lego!"

If Harkins' "NASA Space Shuttle (Saturn V Scale)" reaches 10,000 votes, it could find itself in the same Lego review as another proposed companion to the Saturn V moon rocket — a model of the Apollo launch umbilical tower. That set, proposed by one of the Saturn V's co-creators, has 7,800 votes (as of Tuesday morning).

To date, Lego Ideas has produced and sold three sets based on real spacecraft, including Japan's Hayabusa asteroid sample return probe, NASA's Curiosity Mars rover and the Saturn V. Fan-designed models of the Hubble Space Telescope and the International Space Station also reached 10,000 votes but were not chosen for production after being reviewed.

One other Lego Ideas set, the "Women of NASA," featuring minifigures based on five female space program leaders is slated for release by early next year.