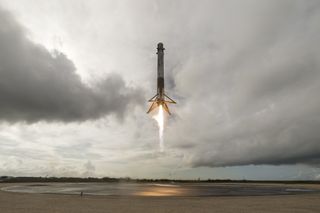 The first stage of a SpaceX Falcon 9 rocket comes down for a successful landing at Cape Canaveral Air Force Station on June 3, 2017.
(Image: © SpaceX)

A series of spectacular photos chronicles the big day SpaceX had over the weekend.

On Saturday (June 3), the California company launched a re-used Dragon capsule for the first time, sending the robotic craft on its way to the International Space Station (ISS) on a cargo mission for NASA. [In Photos: SpaceX's 1st Reused Dragon Spacecraft]

The launch, which used SpaceX's two-stage Falcon 9 rocket, was the 100th mission to take place from historic Launch Complex 39A at NASA's Kennedy Space Center (KSC) in Florida. The venerable pad famously served as the jumping-off point for most of the agency's Apollo moon missions and space shuttle flights. (SpaceX signed a 20-year lease to use LC-39A in 2014.)

About 2.5 minutes after liftoff on Saturday, the Falcon 9's first stage separated, then began maneuvering for a trip back to Earth. About 5 minutes later, the booster made a pinpoint vertical touchdown at Landing Zone 1, a facility at Cape Canaveral Air Force Station, KSC's next-door neighbor.

SpaceX has now pulled off 11 such first-stage touchdowns. And the company has re-flown one of these landed boosters to date, during March 30's successful launch of the SES-10 communications satellite. (The launch of the BulgariaSat 1 communications satellite, which is scheduled for June 15, will also use a pre-flown Falcon 9 first stage, SpaceX representatives have said.)

These activities are part of SpaceX's effort to develop reusable spaceflight systems, a key priority for company founder and CEO Elon Musk. Full and rapid reuse of spacecraft and rockets will slash the cost of spaceflight, potentially making Mars colonization and other grand exploration feats economically feasible, Musk has said.

"It's starting to feel kinda normal to reuse rockets. Good. That's how it is for cars & airplanes and how it should be for rockets," Musk tweeted Saturday.

The Dragon that launched Saturday reached the ISS today (June 5), delivering about 6,000 lbs. (2,700 kilograms) of scientific experiments, hardware and other gear to the orbiting lab. The capsule will stay attached to the station for about a month, then return to Earth for a soft, ocean splashdown.

This particular Dragon also visited the ISS once before, back in September 2014. Each Dragon can probably safely fly about four missions to and from the ISS, Hans Koenigsmann, SpaceX's vice president of build and flight reliability, said during a press conference Saturday.

Each Falcon 9 first stage is designed to fly 10 times with no hardware changes, and at least 100 times with only moderate refurbishment, Musk said in late March.