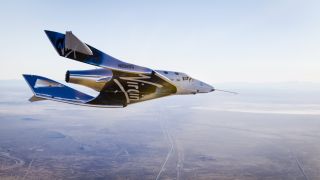 CAPE CANAVERAL, Fla. — Richard Branson's Virgin Galactic is on track to begin commercial passenger spaceflights before the end of next year, the company's chief executive said.

For years, Branson has been optimistically forecasting the start of rides aboard SpaceShipTwo, an air-launched suborbital spaceplane that is designed to carry six passengers and two pilots to an altitude of about 62 miles (100 kilometers).

During the suborbital hop, passengers will be able to experience a few minutes of microgravity and see the limb of Earth set against the blackness of space.

Branson has been more circumspect in his schedule projections since an October 2014 fatal accident during a test flight of Virgin's first vehicle. But in an interview with The Telegraph earlier this month, the billionaire entrepreneur said he'd be "very disappointed" if the program isn't well underway by the end of next year.

"We're well into test flight now," Whitesides told the Senate Committee on Commerce, Science and Transportation. The Virgin CEO addressed the committee along with other industry leaders during a hearing on reducing regulation barriers in the space industry.

"We're looking forward … to a fairly big transition of our staff to your state of New Mexico," Whitesides added in response to a question from Sen. Tom Udall, a New Mexico Democrat.

Virgin Galactic intends to base its commercial spaceflight service at New Mexico's Spaceport America, which was finished five years ago at a cost of nearly $220 million.

Construction funds for the spaceport came from state oil and gas taxes and from bonds, which were backed by a quarter-cent tax levied by the two counties closest to the 18,000-acre spaceport.

The second in a planned fleet of Virgin spaceships is undergoing testing in Mojave, California. So far, the ship, known as VSS Unity, has made three glide flights. The company has not said when Unity's first powered test flight will be, nor how many flights are expected before the start of commercial service.

About 500 people have signed up to take a ride on SpaceShipTwo. Tickets are currently selling for $250,000.