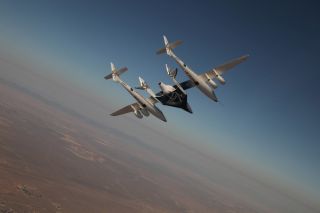 Alan Walton had waited long enough for his ride to space. The venture capitalist, who was among the first buy a ticket for Virgin Galactic's private spaceship, finally gave up after waiting seven years for the vehicle to be ready.

Walton asked the company for a refund of his $200,000 ticket free this spring, the Associated Press reported.

The man, who had already trekked to the North Pole, climbed Mount Kilimanjaro and skydived over Mount Everest, thought a joyride to space would be just the thing. But at his 75th birthday, Walton decided he wasn't as spry as he used to be, and couldn't wait any longer for Virgin Galactic's SpaceShipTwo to be ready, AP reported.

The private space plane has been under development for years ever since its maker, the Scaled Composites company, won the $10 million Ansari X Prize in 2004 for flying the first manned private spacecraft, SpaceShipOne, to space twice within two weeks.

After that triumph, Scaled and Virgin Galactic ramped up work on a commercial version of the vehicle that would offer space tourists suborbital rides to altitudes of about 62 miles (100 kilometers). These trips wouldn't make a full orbit around the Earth, but would provide a few minutes of weightlessness and a view of the planet below.

At the time, Virgin Galactic founder Sir Richard Branson estimated that SpaceShipTwo would be ready to fly passengers by 2007. Walton was among the first 100 customers to sign up.

At this point, there's still no official launch date for SpaceShipTwo's commercial flights. The craft has made several unpowered glide tests after being released in mid-air from its carrier plane, WhiteKnightTwo. The company hopes to begin rocket-powered tests sometime next year. [Photos: SpaceShipTwo's First Glide Test Flight]

"It's tough," Erika Wagner of the X Prize Foundation told AP. "We've seen slower progress than a lot of people would have liked."

Yet experts say testing of the spacecraft is a slow and careful process that can't be rushed too much.

"Everything in aerospace always takes longer that you originally think," said John Gedmark, executive director of the Commercial Spaceflight Federation, according to AP.

And so far, most prospective customers seem to be hanging on for the ride. Of Virgin Galactic's roughly 450 paid ticket holders, less than 10 have dropped out, according to Virgin Galactic chief executive George Whitesides.

"Folks are tremendously loyal and excited," Whitesides said. "They want us to do it safely. They want us to take our time and make sure we got it right."