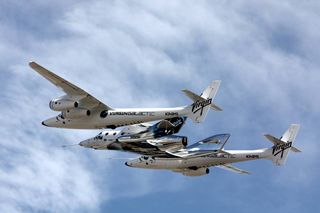 Virgin Galactic's second SpaceShipTwo, the VSS Unity, is carried by its WhiteKnightTwo mothership ahead of Unity's third unpowered glide test over the Mojave Air and Space Port in California on Feb. 24, 2017.
(Image: © Virgin Galactic)

The VSS Unity, as the second SpaceShipTwo is called, took to the sky from the Mojave Air and Space Port in California under the wing of the company's WhiteKnightTwo mothership. At the controls were pilots Dave Mackay and Rick "C.J." Sturckow, a former NASA astronaut who flew on four space shuttle missions, commanding two of them.

"Today was CJ's first flight in VSS Unity. But's he's got lots of spaceship experience already," Virgin Galactic representatives wrote in a Twitter post that included photos of Sturckow's shuttle missions. While it was Sturckow's first flight with VSS Unity, he did fly the VSS Enterprise, Unity's sister ship, multiple times prior to that vehicle's loss in a fatal accident in October 2014.

During Friday's test, the WhiteKnightTwo carried VSS Unity to a target altitude above the Mojave Desert, then released the space plane so it could glide back to Earth and make a runway landing at the Air & Space Port.

Founded by the British billionaire Sir Richard Branson, Virgin Galactic aims to build a fleet of SpaceShipTwo vehicles to fly paying passengers on round trips to suborbital space. The company's SpaceShipTwo cannot orbit the Earth. The spacecraft is designed to launch six passengers and two pilots 62 miles (100 kilometers) above the planet, where they will experience several minutes of weightlessness and witness views of Earth from space. Tickets for the flight cost $250,000.

Branson was present to watch Friday's test flight. He was joined by his son Sam Branson and British physicist Brian Cox.

The test glide marked the third unpowered free flight for VSS Unity, and its seventh overall (the craft remained attached to its mothership for the other four flights). The other glide test flights were in 2016; one on Dec. 3 and the other on Dec. 22.

You can see more images from the flight from Virgin Galactic here: