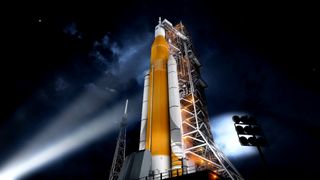 An artist's illustration of NASA's massive Space Launch System rocket and its Orion capsule on the launchpad.
(Image: © NASA)

"While nobody wants to do anything unduly dangerous, SLS/Orion must be produced and operated as cost effectively as possible and demonstrate tangible achievements to the public in order to avoid the fate of Constellation," Greg Autry, who resigned from NASA on Thursday, wrote in an email.

Constellation was the space exploration initiative under former President George W. Bush that was canceled by the Obama administration in 2010.

Both programs financed a heavy-lift rocket — the Ares booster under the lunar-orientated Constellation program and SLS under Obama's asteroid rendezvous-first program — and a deep-space capsule called Orion. The common goal of both programs was eventual human expeditions to Mars.

"Continuing our trend toward ever greater institutional risk aversion is entirely incompatible with the reality of three decades of declining NASA (inflation adjusted) budgets," Autry wrote, noting that he was not speaking on behalf of the Trump administration.

"Nobody is ever restoring the Apollo budgets so let's stop talking about how we did things under that model. Given that we have a system built around very proven components (engines, boosters, capsule) spending $1 billion-plus on a single test undermines the bolder exploration goals most of us in the space community support," Autry said.

He later added that the list of flight-proven hardware also includes the upper-stage booster that is slated to fly on the SLS debut mission.

At the behest of the Trump administration, NASA is conducting a feasibility study to determine if the benefits of flying astronauts on the first SLS/Orion test flight, currently an unmanned mission slated for late 2018, offset the additional costs, schedule delay and potential risks to human life.

Autry said he has faith that NASA, its vendors, the Aerospace Safety Advisory Panel and other reviewers will "make a wise choice" about whether or not to add crew to Exploration Mission-1, or EM-1.

"My unofficial perspective on crewing SLS/Orion EM-1 is that it has and it will be carefully considered by many qualified and conservative professionals," Autry said.

He declined to elaborate.

Before joining the Trump administration, Autry was an assistant professor for entrepreneurial studies at University of Southern California in Los Angeles, with a focus on commercial space.