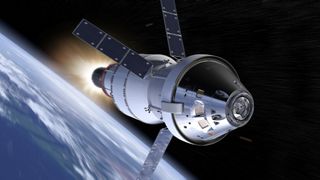 An artist's impression of the Orion capsule in space.
(Image: © NASA)

CAPE CANAVERAL, Fla. — NASA will take about a month to assess how much extra time, money and risk would be added to the debut flight of the Space Launch System (SLS) rocket if a two-member crew were aboard, officials said today.

The launch, called Exploration Mission 1 (EM-1), is currently scheduled to be the first test flight of the SLS booster, which will send an uncrewed Orion capsule into deep space. Under the existing plan, a crew would fly aboard the Orion/SLS system on the EM-2 mission in 2021.

The Trump administration has asked NASA to look at either adding crewmembers to the EM-1 flight or advancing the launch of EM-2, Bill Gerstenmaier, NASA's associate administrator for human exploration and operations, told reporters during a news conference today (Feb. 24). [Photos: NASA's Space Launch System for Deep Space Flights]

Moving up the date of EM-2 is not feasible because of changes that have to be made to the SLS launch platform to accommodate a taller upper-stage motor that NASA plans to have in place for that mission, NASA officials said during the news conference.

Gerstenmaier said he also directed his team to look only at options that would take about one year or less to implement, so that a crewed EM-1 flight could launch in 2019.

"I felt that if we went much beyond 2019, then we might as well fly EM-2 and actually do the (plan) we're on," Gerstenmaier said.

The Orion spacecraft has not been fully upgraded to support human passengers since its first test flight in December 2014 (atop a United Launch Alliance Delta IV Heavy rocket). Gerstenmaier said he has no estimate on the additional costs of adding life support, an abort system and other hardware that would be needed for EM-1 to fly with a crew.

"This study will determine how much additional time is needed … to add crew to EM-1," Gerstenmaier said. "We will definitely have a [later launch date]. We also recognize we'll need to add some additional funding."

The prospective mission would have a two-member crew fly in an Orion capsule on an eight- to nine-day mission around the moon, similar to the flight of Apollo 8 in 1968.

NASA's independent Aerospace Safety Advisory Panel said in a meeting Thursday (Feb. 23) that the reasons for having astronauts fly on EM-1 must be compelling enough to override the additional cost, schedule and safety risks.

"We are not proposing what the outcome of NASA's assessment should be," Patricia Sanders, chairwoman of the Aerospace Safety Advisory Panel, said during the meeting. "But in the assessment, we strongly advise that NASA carefully and cautiously weigh the value proposition for flying crew on EM-1."

Flying astronauts on a rocket's debut flight would be a departure from NASA precedence. Only one previous spacecraft, the space shuttle, made its first flight with crew aboard.

"The space shuttle really wasn't built to be flown unmanned, and we would have had to do an awful lot to make that happen," former astronaut Bob Crippen, the pilot on the first shuttle flight, said in an interview with Space.com.

As a winged vehicle re-entering the atmosphere at 25 times the speed of sound, the space shuttle was a far bigger technological leap than the Orion capsule, Gerstenmaier noted.

"This is still pushing the envelope in some areas, but it's not as big a step technology-wise as what we actually did in the case of the shuttle," he said. "We will be very cautious about what we go do. We will do the right thing."

Editor's Note: A previous version of this article incorrectly stated that the first space shuttle flight was launched with a Saturn V rocket; this was a mistake entered by the editor.